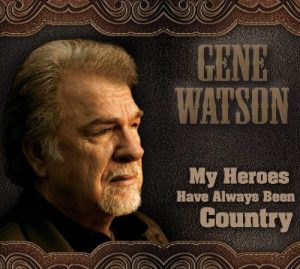 There are so many names I can give you when you ask me about underrated artists within
Country Music and when I give them many people argue with me.
One name I give will always be Gene Watson..why?

Well for one thing he has never been asked to join the Grand Ole Opry
however he performs on it almost more than some that ARE members.
Now mind you, I understand some great Legends haven’t been asked…or have been
and refused because of performance demands like George Strait and Merle Haggard.
Whatever the reasons the fact he is not a member has always saddened me immensely.

Watson’s long career has notched two number ones, 23 top tens and over 75 charted singles.
However despite national recognition he sells out venues all over the world.
And in 2012 he celebrated 50 years in the music business with a great album and
on June 10th he released a concept album of his personal favorite Country songs
for us to enjoy…I would like to tell you about it.

I kind of bought it and put it on my backburner list because I get SO MANY
albums and others grabbed my interest first.
I WAS SADLY WRONG!!!!

This album is REALLY GOOD. The first track is a song that Country Legend Dottie West
wrote called “Here Comes My Baby Back Again”.
Faron Young also recorded it long ago and It’s not really well known.

“Don’t You Believe Her” was a Ray Price song taken from the 1968 album
Take Me As I Am. Honestly most of these songs are VERY obsolete
and not well known.

“Slide Off Of Your Satin Sheets” was a Paycheck song from The Soul And The Edge
wrote by Dan Carson.
It was the “B Side” for Colorado Cool-Aid.

“Make The World Go Away” was a Hank Cochran tune recently recorded by
Jamey Johnson for his tribute album. However so many people recorded it
but Eddy Arnold is credited with first cutting the song.

“Long Black Veil” his version is the same as the Lefty Frizzell version
of this song written in 1959 by Danny Dill.

“It’s Not Love But It’s Not Bad” is a Merle Haggard tune that most avid fans
know but not the general public fans. If you have only listened to a
“Greatest Hits” album you’ll not be as familiar with this song.

“Walk Through This World With Me” was a song made popular by George Jones.

“Turn Out The Lights The Party’s Over” is another less known song written
by Willie Nelson in 1966.
It had an album named after it and Gene always closed his shows with this song
and sometimes he still does that very thing.

“I forget You Everyday” is another Merle Haggard song that isn’t too well
known. I’m actually not sure what album that song is on.

“Count Me Out” was a Marty Robbins song from 1966 I believe.
This was the song I was most unfamiliar with and I’m still
doing research on this song.

“Hello Trouble” was of course the very song made popular by Buck Owens.
And on this following promo video you can see the coming of this REALLY GOOD album.