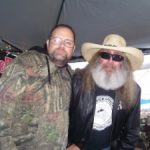 The Master Of Ceremonies was Mr. Gordon Ames AKA Big G.
M-F 6a-10A The Real Deal 93.5 KOOK / 1230 KERV. I search out cool and obscure True Country,
Roots Rock, Hillbilly , Rockabilly, Cajun, Zydeco,Tex-Mex, Blues and Surf tunes, plus the
best of Texas Music . Interviews with the greats.Tune in!!

I finally met Mr.G for the first time at Outlaw Fest 2014, and he was really awesome!
Just as friendly and fun as he is on the radio. Both he and his wife were really
good folks.
From the very first minute of the festival he was laughing and joking his way into
our hearts there.
Ronnie Reals from Realsound Productions played a really funny joke on him by playing
Darious Rucker’s version of Bob Dylan’s Wagon Wheel during a break and it was really funny.

He did a really great job introducing the man who lead us in prayers and also the young lady
who sang our National Anthem before our festivities began.
Not many festivals even do that and I was impressed and humbled to be a part of that.

All four days he did a super fine job introducing all the acts along with Mr. Luther Jackson.
And he also had shirts for sale and visited with everyone he could find there.
Here he is hard at work Ha Ha.

But honestly he was running around like the rest of us were networking and visiting
with folks. I know I greatly enjoyed his presence there and I plan to catch up on his
radio show VIA the internet this week.
I learned alot of new music through his radio show he does a good job finding underground
music and Texas music. Very obscure music not many radio shows play at all.

And honestly that is what Roots Music and Underground Music needs…networking.
WE ALL NEED to come together from all over the country and share what we know
and find these people in the nooks and crannies of EVERY region.
It all comes together like a big puzzle.

He made several announcements about his show and what he plays. He dropped names of TONS
of Legends that he believes should be played on a regular basis and HE DOES THAT!
He’s like the Eddie Stubbs of Texas only with Underground music added to it.
I think he is VERY essential to many people in being a valuable resource to find
out about songwriters and local music from all over.