Well folks it’s time once again to write about one of my personal favorite music festivals
Muddy Roots Music Festival main festival in Cookeville Tn.
Now then, let me tell you more about the who the what and the where of the Muddy Roots Empire and how it runs. What they do is feature music of different genres and most of the time it’s underground or independent music. They also feature the Legends of music in different genres too. There are FOUR yearly events they hold throughout the year and THIS IS the article for the MAIN FESTIVAL in Cookeville at The June Bug Ranch and it’s always the weekend of Labor Day.

This year will be the sixth annual Muddy Roots Music Festival and it is an outdoor event.
Now this article will be updated OFTEN and include more hotel information and travel info
as time passes.
I enjoy staying at the La Qunita Inn and Mr. Jason ALWAYS gets me a GREAT DEAL on my room.
And I want to say this..He and his staff ALWAYS makes me feel very special..like I’m
a valued guest. Medically I’m really well taken care of out there. I know I can ask for
anything I need (within reason) and It’s done.
The first two years I was pretty shy and did not know the music much or the people.
Muddy Roots is also a record label and features many artists and they just formed
Roots Union Records which is a division of them.

There are (or at least has been) three stages the past few years. There were four at one time
and for different reasons it was changed to three.
Last year they announced a sponsor for stage three and this year it is once again sponsored
by the GREAT folks at Cracker Swamp Productions another independent label from Florida.
I spoke to Mr. Nix several times and got a lot of great info and previews and was given the
green light to announce their stage lineup of bands.

Mind you now, these articles are not meant to step on ANY toes and I’m NOT trying to rush
exclusive info out before the festival even announces it!
I’m here to help not to create problems so I usually wait until I’m either told I can OR
it’s already announced by whomever runs the show.

Now normally what Mr. Jason does (much like all other festivals) he announces bands and
headliners slowly through the year and the ticket prices go in tiers.
Honestly I like to wait until it gets higher to give more for my ticket. I KNOW it sounds
goofy but I like to contribute as much as I possibly can. This isn’t JUST spending money
it’s INVESTING in what you enjoy. YOUR support in EVERY WAY is what keeps Muddy Roots rolling.

Now folks I’ll tell you what Matt Woods was one of my TOP 5 sets of Muddy Roots 2014
you can read my review HERE. I’m VERY excited to know I’ll see him again in the field I look forward to reporting on what he does.

And NOW folks I have been given the OK to announce the ALMOST complete lineup for 2015 Muddy Roots. I was contacted this morning and told to release it as soon as his premiere website announced it and I saw that they have so I can pretty safely tell you now. 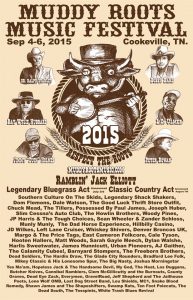 A bunch of these bands if you’ll remember I covered last year and some I have gone to their shows throughout 2014 and 2015 and some I missed. Festivals give me a perfect opportunity to see and hear a bunch of bands at one time. And I’m VERY eager to check out a few of these bands. What a lineup for 2015 Cookeville show….now tickets have already gone up considerably since Muddy Roots has done their job.

Well I’m not sure when the tickets go up in price again BUT they HAVE announced the addition of NONE OTHER than
Bluegrass legend Ricky Skaggs And Kentucky Thunder! His newest album
“Music To My Ears” is available on Skaggs Family Records NOW! Folks I tell you WHAT THIS is a show to NOT MISS!