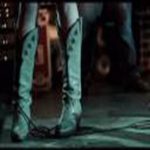 Ok so tonight I get to my mailbox and heck I don’t check it EVERY night at the post office.
I check maybe three times a week, and I get a chance to check it tonight and WOW!
Yeah I order a LOT of music, and I get sent to me A LOT of music..A LOT!

I want to tell you this RIGHT NOW I just got one of my TOP PICKS of 2015 before the year
is even over with…and it only has seven songs on it UM…did I mention it only has seven songs? Folks if this young lady IS NOT the current age version of Loretta Lynn then we don’t
have one yet. THIS IS LEXI LEN AND THE STRANGERS.

She is one of the original “Hellbetty” girls that Shelton Hank Williams 3 originally crowned
within his group of followers and to be honest she’s probably one of the first among a few
others I know. There are now tons calling themselves this but she’s one of the first I knew of.
The guys are called “Hellbillys”.

I met her several years ago in the “Myspace Era” and I watched her get older and wiser.
I always kept watch on what she was doing much like Six Gun Britt and a few more
I can name.I have watched her get broken and built back up..all while being a mommy to her “hellbabies”. She has the most adorable youngin’s and she shares some cute stories of their antics from Bloomfield Indiana, which is where she is located in.

I must tell you when I listen to a country album I usually look for the steel guitar..
and her steel guitarist Matt Lundquist delivers just that!
But the songs….the lyrics…her hurt and her struggles..her pain is all included in these
seven songs. The BEST song I have heard in literally years by a female is “The Junkies Wife’s Blues”. Because it’s HONEST..it is REAL. It is from one American regular gal to the world and it’s from her heart.
JUST LIKE it was in the 1960’s when Loretta was in her early prime before being brought to the world by Ernest Tubb. This song is a descriptive form of the TRUE victim of a person’s drug addiction..the ones that love the addict.
“Oxycoton” you are are so rotten and you have completely wrecked my home
That methamphetamine well it made him act so mean and it ruined the only life I ever known.

I’m telling you if this young lady ever comes to Nashville or the Kentucky area I WILL
be covering this show. I do not say this often but I’m fixin to be taking this album
to several people within the industry to see what we can do with this gal.
Because THIS music needs to come back to mainstream America.

This from her website:
Lexi Len & The Strangers make sweet, heartbreaker country. Lexi began playing shows at 8 years old when she would step up during the set breaks at her Daddy’s shows and proceed to break every heart in the house with her sweet voice. Now, she picks with an outfit of Bloomington, Indiana’s finest seasoned musicians. Mark Minnick (Crooked County, Mary Janes) locks down the drums and Ryan Payton (220 Breakers) rocks the bass. Jason Payton (220 Breakers, Payton Purnell) pulls big tones from his guitars and the sound is rounded out by Matt Lundquist (Otto Mobile, TVMike, Payton Purnell) on the pedal steel.

YOU can order her album HERE and I’m fixin to tell you
if you do NOT order this album you do NOT like Country Music.