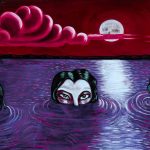 I want all my readers to remember my two promises I made when I started this website.
1. I’ll never publicly make fun of or bash any artist on this website.
2. I’ll never “go to war” with ANYONE. You can save that shit for the National Enquirer
I got too much subject matter to write about and no time to waste on that.
With both of those in mind I must write an article about someone I don’t particularly care
for music wise but I had to give him high respects for what he did for
The Drive By Truckers.

Eric Church gets mixed feelings among many of my friends and some like him
and some tear him a new backside.
I will not sit here and bash the guy musically though I don’t care for his music.
I’ll tell you something I REALLY respect him for..just recently he announced some
spring dates for his “Outsiders World Tour” and announced it included independent powerhouse act The Drive By Truckers.

This act of generous proportions opens up a whole another level of possible fan base
for the Truckers. The Drive By Truckers have made a name for themselves on the independent circuit and underground music lovers have critically acclaimed their albums and shows as some of the best small time music has to offer.
In fact just recently for one show only they re-brought their classic lineup of
Mike Cooley, Patterson Hood and Jason Isbell for a benefit show…and it sold in minutes.
Isbell was only with the band for 5 years but his tenure with them is heralded as their
best of an ever changing lineup.

They currently have 10 studio albums (and a slew of ep’s and live albums) and 2014
they released “English Oceans” which got great reviews, but the Truckers have never
been an arena act.
I think this is going to be a VERY positive thing for them because this will bring their
songs to a whole new age group of fans. Eric Church and his music is primarily marketed
and directed toward 14-30 year old females.
He is played on FM radio and often associated with “The CMT Crowd” and to be honest I’m not really familiar with his music nor do I like his music but to say this wasn’t a very generous act would be a lie.

The Drive By Truckers have never received any major radio airplay like Eric Church does
and A large portion of his audience is not known to do research on bands or musicians.
So to have this band BROUGHT TO THEM will be the best way to turn them on to their music.

In the past this method had panned out as positive for bands like Hellbound Glory
whom was brought out by Kid Rock on a national tour.
I can also say GREAT things about Shooter Jennings bringing along lesser known acts
as his opener as well like my buddy Joshua Morningstar.
And another act I’m interested in checking out is The Cadillac Three..I might be writing an
article on them in the future.