I cover about 175 festivals yearly in this fashion mostly Americana, Roots Music, Bluegrass and now Red Dirt Texas Country is included into my agenda, so you can be assured I will feature quality REAL MUSIC from many genres all over the United States! As always you can buy tickets to all of the festivals I feature from direct links to their own website HERE I make NO MONEY off featuring ANY festival, this is ALL done on my expense.

This festival began in 2008 and by 2013 it grew to a two day festival as the Texas and Oklahoma music scene began to flourish and present day Red Dirt scene is booming to a HUGE margin. Many websites are featuring more of it as mine started about three years ago to mix it in with what I feature on a regular basis, and with good response from my readers.

Hotels,I found an abundance of them HERE is a page of over 40 of them for you to choose from in Austin. There will be a parking fee of 10.00 per day and it clearly states if you park in an adjacent lot you will be towed away. Obviously this is NOT a camping type festival so you’ll need a hotel if you don’t live in this area.

Also, upon talking with frequent festival attendees of Lone Star Jam they are attempting to fix the problem of very little shade for the time of year there. Before I go on to add my usual maps and lineups for the bands involved I would like to add the ticket prices and links here. 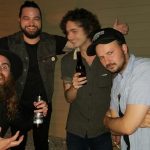 Not long ago I went over to the Warehouse In Bowling Green to see this band open up for the steel woods there, and they absolutely astounded me with their unique sound, juxtaposing honky tonk Country with a dark almost doom metal sound. I’ll be completely honest about this band I couldn’t describe them to any genre at all, and I cover thousands of bands on here.

The Josephines just go nuts on stage, with harmonies that now display a well oiled machine that emanates a  barrage of boot stomping music with lyrics that would make mom cringe. This ain’t no tent revival here folks, this is an absolute ride through hell complete with all the bells and whistles of a almost Ryman Auditorium ready band.

I wanted to take some time out here to dwell on their set as well as one other last weekend as I was out and about watching music all over. Mr. Kyle Daniel and the Josephines both played the 20th anniversary for The Spillway Bar And Grill. Now, mind you there were other bands as well, but I opted to hit Rib Lickers For High Fidelity, so I could cover both shows.

Mr. Kyle Daniel was a really good band and he had some truly well written songs as well, I’ll admit I was wrapped up writing some other things while they were performing but I did stop at several times to watch them. Some of the lyrics really caught my attention, like the song  “Halfway To Your Heart”.

He has a very gritty Americana type voice and his songs were upbeat and easy to understand. I liked the style of this man and his band very much. As I said I pretty much walked in halfway into his set, so I’m not totally sure if he played covers or not.

‘God Bless America Damn Rock And Roll” was another good upbeat song followed by a song he wrote with Mr. Brent Cobb called “Ain’t No Difference.Now the song of his that really grabbed my attention was called “That Somebody Ain’t Me”, that song was a masterpiece of a breakup song. It can be related to by so many genres of music fans it was uncanny!

Another good song was called “A Friend With Weed” and he closed with a song called ‘Hangover Town”. I’m going to be keeping this man on my radar for DAMN SURE. What an energetic set he played here, this man had a wonderful stage presence and poured his heart into his music.

The Josephines tore the roof off the Spillway last weekend as they opened with one of their songs from their 2017 EP called “Coal Mine Gone”, followed by one of my favorite and more poignant songs they do called ‘So Much Blood”. Now folks, their 2017 EP made my TOP 50 OF 2017 last year.

They played a few songs I have never heard them play live before like ‘Satan’s Field” and they also played a new song called ‘Boxes”. I was very excited to hear some unfamiliar music from them, and I may to catch up with them in the future to chat about THEIR FUTURE as a unit, and where they have opted to head musically.

Their set included songs like “Never Ends” and another called “Brother John”. Another one of my favorite songs that they play from their EP was called ‘Trucker’s Song”, which displays some damn fine writing skills. THIS IS one of those bands that I can tell will be growing immensely, and I’ll be watching them move up to another echelon very soon…I’ll be featuring them every step of the way!

“Cocaine” was up next followed by “Sober Up” and my two favorite songs they do here,  “Maggie’s Bones” and they closed their set with a song that the crowd had been yelling for all night (me included) called “Fireball”. If you don’t have their album you need to go over to their website and pick up a copy of it, TRUST ME this band will be making bigger waves in their local circuit and it won’t be long until a larger market gets a hold of them!