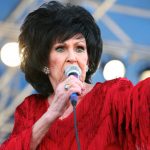 Tonight as I write this I find it no more fitting and urgent to write about Miss Wanda Jackson and her announcement to release BRAND NEW music in 2019. She has been called the First Lady of Rock And Roll, and the Queen Of Rockabilly in her sixty year career span, and here recently she has returned to Nashville to begin the record.

After decades of recording covers she actually hit the writing room for original music with some heavy hitting co writers the likes of Pistol Annies member Miss Angaleena Presley and Miss Elle King. If you’ll recall correctly she contributed to Miss Angleena’s album Wrangled on the song “Good Girl Down”.

This album will also be co-produced by four time Grammy award winner Vance Powell, who helped Mr. Jack White record her 2011 collaboration album called The Party Ain’t Over Yet. It also comes at a perfect time as it precedes her new autobiography called Every Night Is Saturday Night A Country Girl’s Journey To The Rock And Roll Hall Of Fame, where she discusses the challenges of her integrated band The Party Timers.

She talks about her relationship with Elvis, being discovered by Hank Thompson, and addresses why she never returned to the Opry for more than fifty years. She last appeared on the Opry in 2011 appearing with Mr. Jack White and others. On June 17th she made a triumphant return to the institution and received a standing ovation.

She has also secured booking management to support this upcoming album, which is great to see. My friend Jon Hensley used to manage her and Shooter both, and through brands like Muddy Roots Miss Wanda has maintained relevance within the music scene.

I write this with great urgency today because last night we lost Miss Lorrie Collins leaving Wanda Jackson one of the last true female Rockabilly Legends left. I shall report more on this subject as I discover the facts. 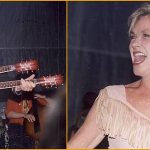