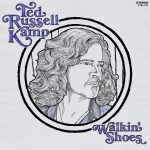 One of the downfalls of the amount of music that exists, and the amount of music that is sent to me, is the fact that I simply cannot feature it all on as timely of a basis as some of the other websites. But you know what…..I don’t care, as long as I can eventually get it up within a reasonable amount of time. There simply exists more artists than I can often times keep track of.

How many people are lucky enough to boast a member of their band having eleven of their own releases? Mr. Shooter Jennings does, as his bassist Mr Ted Russell Kamp released his latest album called Walkin Shoes. In my opinion he is a Legend on stage, having played with some of the finest people in show business the likes of Miss Wanda Jackson, Miss Jessi Colter and Miss Rosie Flores.

This album features his band mates Mr. John Schreffler, and Mr. Jaimie Douglass whom also play with Mr. Shooter Jennings. It also features Miss Jaime Wyatt, Mr. Brian Whelan, Mr. Sam Morrow, and Mr. Dan Wistrom. Kamp wrote and co wrote all 13 songs on this album which started out with a song that spoke to me above all the rest called “Home Away From Home”, about being on the road. It reminded me of my many friends and many road adventures music has taken me on.

When you listen to this album one can easily ascertain that Mr.Ted is truly a poet’s poet, and a visionary of American Roots music. I found that Walkin Shoes was the basis of the entire album and not just one song. But I think many musicians can relate to being “Paid By The Mile” which Mr. Sam Morrow helped co write and sings on.

Miss Jaime Wyatt sings on “Freeway Mona Lisa” and also “Heart Under Pressure” which equally fit with the other songs well. This album almost made it a concept album of sorts focusing on the eclectic life of a traveling musician. This album captures the true ambiance of Roots music in it’s earliest form.

Track Listing
1. Home Away From Home
2. Paid By The Mile
3. This Old Guitar
4. We Don’t Have To Be Alone
5. Heart Under Pressure
6. Tail Light Shine
7. Highway Whisper
8. Get Off The Grid
9. Written In Stone
10. Freeway Mona Lisa
11. Just About Time For A Heartache
12. Less Thinking More Drinking
13. Roll On Through The Night