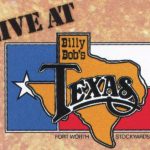 I’m going to tell you honestly folks, I LOVE live record series like Live At Billy Bob’s or Austin City Limits. I collect them with great love and rejoice when I find pieces I need. I personally salivate over the the anticipation of opening my new additions to the series. The most pertinent reason these episodes are  important is preservation of history for future generations to enjoy. This may be an ample opportunity to reach new fans for some of the artists featured on this series.

Imagine now we can actually WATCH the ambiance of Mr. Billy Joe Shaver, as he growls out his live version of “Wacko From Wako” or if you enjoy Red Dirt you have Mr Wade Bowen or Mr. Stoney LaRue doing the “Oklahoma Breakdown”. History has been captured one of Texas Music’s most beloved disbanded groups Cross Canadian Ragweed as they played their iconic “Boys From Oklahoma”.

Over 20 years ago, Pat Green became the first artist to record a Live at Billy Bob’s Texas album. Since then, another forty-nine artists would go on to record in the World’s Largest Honky Tonk. Smith Music Group has gathered a collection of their favorite cuts from the last two decades – including icons Willie Nelson and David Allan Coe with newer artists like Shooter Jennings – and put them into a TV Show! You’ll see exclusive interviews, one offs from up-and-comers and intimate backstage acoustic performances.

“It was my Dad’s wish that the Live at Billy Bob’s Texas series would be aired like this,” Ricky Smith, current CEO and son of Smith Music Group founder Rick Smith. “Rick Smith Sr. had a grand plan to record all the big name acts in country at Billy Bob’s Texas and have it air across the country. He recorded a bunch before he passed on, giving Nashville a run for their money. We’ve done a few artists that are outside the Country genre since then, like the Toadies. We’re still hoping to capture as many artists as we can. This is a place that has hosted Chuck Berry and Waylon Jennings.”

A lofty goal, considering the amount of artists that grace the mainstage throughout the year. The 100,000 square foot facility can hold 6000 rowdy patrons on a given night and has been host to hundreds of musical acts, from Alan Jackson to ZZ Top. On Fridays and Saturdays, the venue also features live bull riding – a step up from the mechanical variety. It seems like an unlikely source for a series that has sold millions of albums.

“There are several times that Smith Music Group and Billy Bob’s Texas has put everything on the line to make the album series happen,” Ricky continues. “It takes a whole lot of hard work to get artists like Willie Nelson or The Charlie Daniels Band. But we have them, and more. With this new Live at Billy Bob’s Texas TV series, we hope to find someone that hasn’t seen these videos. Hopefully, a longtime fan will share it with the next generation. After twenty years, there are still quite a few fans that remember that first show with Pat Green. They’re still passing on the memory of that experience every time he comes back to the Billy Bob’s Texas mainstage.”