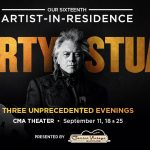 You can learn a LOT at the Country Music Hall Of Fame And Museum, from young to old history abounds in ever nook and cranny of this institution. They recently had a big celebration of Mr. Keith Whitley and opened a nice exhibit for him, I have yet to get down there to see that one but I have went to the Loretta Lynn exhibit and the current mega exhibit of Outlaws And Armadillos which focused on the Outlaw Era of the 1970’s.

There were so so many wonderful periods of time within music that the museum showcases on a regular basis like the Bakersfield Era, the Nashville Sound and the rise of Bluegrass. I don’t know about YOU but I HAVE so many questions about music, who was first, where did it come from, Why is Mr. Bill Monroe the father of Bluegrass?

There are exhibits like the American Currents which recently added a small feature for Mr. Tyler Mahan Coe’s popular podcast “Cocaine and Rhinestones” among many others that are blazing a trail for REAL Country Music in today’s day and age, the likes of Mr. Chris Stapleton and Mr. Strugill Simpson. The exhibit that highlights the entire life of Miss Emmylou Harris is absolutely breathtaking and amazing the amount of precision that went into that particular one.

I don’t know about you, but I LOVE Mr. Marty Stuart’s music and what he stands for as a person, and what he has done for Country Music is unrivaled by pretty much anyone alive today. But I HATE that also because as a  collector I cannot buy SHIT, because he quickly snags it all on me. I simply cannot bring that much cash to an auction to compete with Mr. Marty Stuart, the other detrimental thing is that when he gets it, it gets locked away and the public loses access to seeing it.

He has gathered five Grammy awards, was the 2017 Americanafest winner for Group Of The Year, and won two IBMA Album Of The Year awards. Out  18 albums, he has amassed 33 singles, with 13 charted songs. Although he hasn’t earned a number one single, he remains revered as a Country music Legend by folks like me. I’ll dispute his stature in this business anytime that anybody wishes to step up to the podium on me.

The Sept. 11 show will focus on the 20th anniversary of Stuart’s album The Pilgrim. On Sept. 18, Stuart will host a “Psychedelic Jam-Bo-Ree,” featuring classic country songs and performers from the 1960s. The Sept. 25 show, “Songs That Tell a Story,” will be an acoustic night of story songs. Each show will feature special surprise guests.

The 1960s introduced us to undeniable superstars and gave us unforgettable songs. Join Stuart for an evening celebrating country music of the 1960s, featuring a line-up of influential artists and musicians from one of the most important periods of country music history.

Marty Stuart will celebrate the rerelease of his landmark 10th studio album The Pilgrim during the September 11 show. The Pilgrim, which showcases Stuart’s songwriting and instrumental talents, tells the story of a man from Stuart’s hometown of Philadelphia, Mississippi. He will celebrate this 20-year milestone with a host of musical guests.

SEPTEMBER 25: “Songs That Tell a Story”

Harlan Howard famously referred to country music as “three chords and the truth.” On September 25, Stuart will pay homage to country music’s musical stories with an acoustic show. This line-up will feature a number of Nashville’s most influential and revered storytellers.

Past Artist-In-Residence performers include: