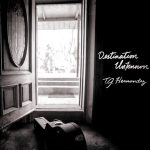 I been catching up on some albums here that kind of fell through the cracks of this year’s mess here, but this is an upcoming release form an artist I became familiar with in 2018. Folks this is Mr. T.J.Hernandez , and his second album here is a top notch effort from both a songwriting and a recording aspect.

The recording job on this new album is very pellucid, and it rivals a big time label from Nashville. I think Nashville is becoming more aware of some of the better recorded albums in underground music. Mr. Bill McDermott did a wonderful job producing this album, and that’s a name I haven’t heard in quite awhile.

“The Things I Do” is a classic sounding two step, that has a very retro Honky Tonk sound to it. That automatically attracted me to this album myself. This song has a real bounce to it, along with cleverly written lyrics and that old style piano that the current “Country” we have now is lacking in immense fashion. He co wrote this song with Mr. Bryan Martin.

“Between A Woman And A Song” is a really nice but poignant road dog song, about the loneliness of choosing between being home with family and performing for your fans. This song was co wrote with Mr. Tom McElvain.

The songs on this album show ardent growth in his ability as a songwriter , and it is juxtaposed well with the really nice steel guitar work and the way this album flows. All of the songs compliment one another quite well, and from him they stand believable. and relatable to anyone who travels the roads.

“Desperate Men” is a Billy Don Burns song that was arranged VERY WELL on here. The harmonica and guitar solos from Mr. Jelly Roll Johnson and Mr. James Mitchell  push this song along very well, it’s always been one of my favorites Mr. Billy does. Followed up by the slower song called “Destination Unknown”, which delivers inspiration to the dreamers, and folks who are on the bottom crawling to fight on the way up. I can tell you even as a journalist myself, there have been a plethora of times that I have been at the end of my rope and wanted to quit..and I didn’t.

All eleven songs on this album are truly outstanding “Right All My Wrongs” spoke to me as an individual because right now I am fresh out of recovery from a pill addiction. I’m 60 days sober now, and righting all my wrongs while working my twelve steps and finding a sponsor. I think I went back and finished all the work I left aside while being messed up..sobriety is a WHOLE NEW ADVENTURE!

I think this album will begin a new adventure for him. It’s well written, and very old school sounding, gives you a truly warm retro feeling in the feels. Get prepared to kicked in the gut, and have your teardrops assaulted with darkness and gloom..cause this album has it all.

You can pre order this album HERE.