I’m still going a mile a minute here, trying to catch up to the piled up amount of work I have here in the office. Even last year I missed out on a few albums that came out, but this one was personal to me and I’ll tell you why.

Years back when I started my website here, we had one social media outlet called Myspace, and we only had a limited amount of local bands that actually toured THAT I KNEW ABOUT. Until this Myspace came out, and I began embarking upon bands past The Old 97s and Split Lip Rayfield and Scott H Biram.

I got into a whole entire new music community that emanated from a grandchild of one of my greatest heroes of County Music…Hank Williams III. See, I knew Mr. Kayton Roberts pretty well and he was playing steel for Hank III for his first two albums. He called me and told me that Shelton was going to begin touring as Hank III on a regular basis..and I salivated over the idea.

I started going out to his shows all over the place and meeting different people that shared a passion for his music and they became one big family type deal akin to the Grateful Dead. THEN so many bands began to emanate from this type of local music, and they called it Roots Music.

All of a sudden we had The Goddamn Gallows, The Calamity Cubes, Filthy Still and literally hundreds more, including this young lady Miss Lexi Len and one of the fellows on her first song of this self named album Mr. Austin Lucas.

I feel an ardent desire to give this young lady more than just a simple album review. The reason that I feel this way is the fact that I can always count on her sempiternal Honky Tonk Country sound. When she puts out a new album, I KNOW what I’m getting music wise..but it’s the songwriting that IS changing..and that’s NOT a bad thing at all.

On her last album she raised a good point and showed us how frustrating it was to be a junkie’s wife, and through her music she has never been afraid to share her desire to achieve an irenic life, free of drama.

However the rumbutious offering called “Red Head, Red Hot And Rogue” showcases how she learned at an early age how to have men wrapped around her fingers. As a man, I can relate to this entire album, especially coming from a female. Miss Amanda Williams and Mr. Chris Steward wrote this one, however it complimented the album so well that leaving it off would suck!

“My Turn To Leave” showed me strength and growth as a person, and a relentless precision to lyrics and twists and turns within a song. Even though that song was written by Mr. Ryan Payton and Mr. Matt Lundquist, Miss Lexi delivers the song with such sincere emotion that it convinced me she lived it all.

In 2020 I think the closing song here “Angels And Outlaws ” holds a special significance to all of the Outlaw Era heroes that gained their angel wings lately. In fact as I write this Mr. Jimmy Rabbitt died this morning, I could list a plethora of my heroes that 2020 has taken from us. I’m terribly sorry I didn’t feature this album earlier, BUT BETTER LATE THAN NEVER!

You can order this album HERE. 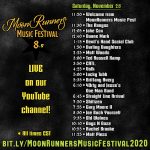