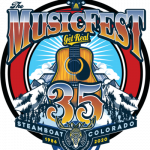 One of the few outdoor festivals that I have yet to attend as of yet is The MusicFest At Steamboat. This festival is one of the older of it’s kind, and one of the only ones in it’s area of what it offers the patrons. It is the largest group ski trip of it’s kind in the nation, and it is also one of the longer events I cover in my festival series. This festival usually boasts a 5 – 7 day events period.

For the entire schedule at a combined cost to see each band separately live, you save over 200 buying a ticket to this event. Now to be honest, to take in every act on this roster would be an arduous task in itself.

For the people that ski and enjoy music both, this festival has a great layout in which to plan one hell of a fun vacation week. If you plan your day around the music and skiing, you stay busy. Unless you are like me, where you just stay put for large blocks of time to see a whole lineup of a day’s shows.

This festival is more spaced out, spanning over several different venues, totaling almost 200 hours of music and 7 different venues. All of the artists involved are from the Texas and Oklahoma Red Dirt communities, and usually this is a big job for me. Simply because I like to embed links into all my articles…folks…I cover 275 of them!

As of right now, they have not made any further announcements to the lineup or the logistics of the festival. For now, please read these words from Mr. Kinky Friedman.

Welcome to the MusicFest at Steamboat! The last time I was here, I drank a glass that, apparently, contained my girlfriend’s contact lenses. This irritated her but it did give me some new insights into myself. One of the things I learned was that MusicFest is a great way to raise hell and awareness at the same time.

Whether on the stage or on the ballot, independent voices are rare enough in this increasingly homogenized world. It’s not terribly surprising that many of these voices emanate from the Lone Star State. Deep in our hearts, all Texans are independent. In music, this has manifested itself in the rugged, righteous individualism of artists such as Willie Nelson, Waylon Jennings, Bob Wills, Buddy Holly, Billy Joe Shaver, Townes Van Zandt, Guy Clark, Jerry Jeff Walker, Doug Sahm, Ray Benson, Lyle Lovett, Robert Earl Keen and Cross Canadian Ragweed to name only a few. Some are dead and some are living. In my life, I’ve loved them all. Not sexually of course.

If I were governor, Texas would be run by musicians instead of politicians. We may not get a lot of work done in the mornings, but Texas would be a better place. Steamboat already has most of our musicians of course, so Colorado doesn’t really need any help. Wish I could be there, but somebody’s got to mind the store.

I ran a spiritual campaign for governor, not a political one. In the words of my spiritual adviser, Billy Joe Shaver, “If you don’t love Jesus, go to hell.”

In the meantime, hang on tight, spur hard, and let ‘er buck. And may the God of your choice bless you.