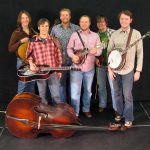 Yeah, it’s pretty tough following all of these bands on 2022 tour announcements and all of the 275 festivals we report on here, and also catch up on all of the 2021 work we missed while taking care of our issues we had to step back over.

You can be sure to bet that it will take many hours of labor over the keyboard to catch up with everything I need to do on this website, but rest assured I am going to kill this job.

The Infamous Stringdusters have influenced me in my quest for total music knowledge for many, many years now.Their first three albums on the Sugar Hill label were three very influential albums for me. The Bloodshot label boasted many Roots albums that I loved, as well as a ton of the Jamgrass bands and Bluegrass bands like Split Lip Rayfield, and this band…The Stringdusters.

They have a new album hitting the market on February 18th and they have a new tour list being released today, and I wanted to touch on both here.

The Infamous Stringdusters Announce 2022 Toward the Fray Tour
Kicks off Jan. 20 with Greensky Bluegrass,
Dustbowl Revival supporting west coast leg
Presale Live Now, On-sale Thursday, Nov. 4 at 10am PT via thestringdusters.com/tour (headlining dates only) and Friday, Nov. 5 at 10am ET for Greensky dates
Hot on the heels of the new record announcement (Toward the Fray releasing Feb. 18) made last month by Grammy and IBMA award-winners The Infamous Stringdusters, the band is pleased to also announce a January through April tour of the same name. Truly coast to coast, the band will kick off on Jan. 20 in Albany, NY with good friends Greensky Bluegrass, touring through most of the east coast and into parts of the midwest and southeast. Dustbowl Revival will hop on towards the end of March to make several stops in California, wrapping the 4 month tour in Seattle, Washington on April 9th. Pre-sales are, as of today, on-sale for headlining dates. General on-sale starts Thursday, Nov. 4 at 10 am PT. Please visit thestringdusters.com/tour for more information and to purchase tickets.
Toward the Fray, the band’s first release of original music since 2019’s Rise Sun, will be released on February 18th, 2022 on Americana Vibes via Regime Music Group. Fans can now listen to the first single, “Toward The Fray” right here and digitally pre-order or pre-save Toward the Fray now at this link. The Dusters also designed a plethora of new merchandise to celebrate both the tour and release of Toward the Fray—including, but not limited to, a Stringdusters North Face jacket, limited edition colored vinyl, and an adorable Toward the Fray teddy bear. Pre-order all of these and more at the Infamous Stringdusters online store.
Want to ring in the new year with ‘em? The Stringdusters will be returning to The National in Richmond, VA for a 3-night New Years Eve run. The band will be joined by special guests Sam Bush on Dec. 30 and Keller Williams on Jan. 1, while the Dec. 31 show is billed as a 3-set “Evening With…”. Tickets are currently on sale through AXS.com.
More About The Infamous Stringdusters: The Infamous Stringdusters is a progressive acoustic/bluegrass band, who first emerged in 2006, consisting of members Andy Hall (dobro), Chris Pandolfi (banjo), Andy Falco (guitar), Jeremy Garrett (fiddle), and Travis Book (bass). The Dusters won three awards at the IBMAs in October 2007 for Emerging Artist of the Year, Album of the Year (for Fork in the Road), and Song of the Year for the album’s title track. The band was also nominated at the IBMAs in 2017 for Entertainer of the Year. In 2011, “Magic No. 9” (from Things That Fly) was nominated for the Best Country Instrumental Performance at the 2011 Grammys, while in 2018 the band won the Grammy for Best Bluegrass Album for Laws of Gravity.