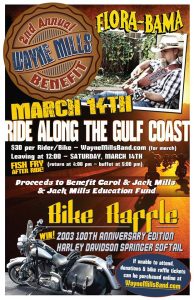 Those fine folks at the Florabama lounge and oyster bar are hosting the Second Annual Wayne Mills Benefit on March 13th and 14rth 2015. I could honestly go on and on about how meeting Wayne Mills has affected my life, and how many COUNTLESS people I have met through him. In 2013 I covered the Outlaws and Icons event in Altamont Tennessee and it all fell into place from there.

I relaunched this website from the Kara Clark portion of the Altamont event that cold weekend and from then on I have featured literally thousands of events and performers from all over the world. I met Wayne Mills that weekend and became friends with him there. It was an honor to cover that event for everyone and I really had a lot of fun and was turned on to so many other performers too. We all had a wonderful time up there on that mountain and came down with a new lease on life and music as well. I really knew these artists were indeed going to make an impact on the music scene and Nashville in general.

Then..it happened…a few months later I got a text from someone that Wayne Mills was killed. I was taken aback in my thoughts it was some kind of sick ass joke or a mistake. Upon making a ton of phone calls and hours on social media I found out it was NOT a joke but indeed a fact, the man I just became friends with and just began to admire
was shot and killed inside a Nashville bar. This isn’t a gossip website or News site where I try to analyze or dissect anything, so I’m not going into details or other craziness about who did what or speculate what happened. He was killed by a bar owner for reasons unknown to us and you cannot give me a decent reason why he was. It was completely unnecessary and I do not believe there will ever be an answer to close the situation out.

This is the second year of the benefit concert and several other activities tied in with it to honor and celebrate the legacy Wayne Mills left behind. I always challenge myself in that aspect…if I die today what will my legacy be?
Who would remember me or be affected by my website or memories I left behind? Would there be benefit shows for my legacy? Ask yourself those questions and strive to make a difference in people’s lives and their hearts like Wayne Mills did.

These are the performers I have been reported will be on the roster for this event:
Dallas Moore
Kyle Wilson
Brasher Bogue
Josh Newcome
Hal Bruni

Those fine folks at Dat Sauce will be raffling off a 2003 100th
edition softail Harley motorcycle and there will be a rally and above stated many other events tied in with the concerts.