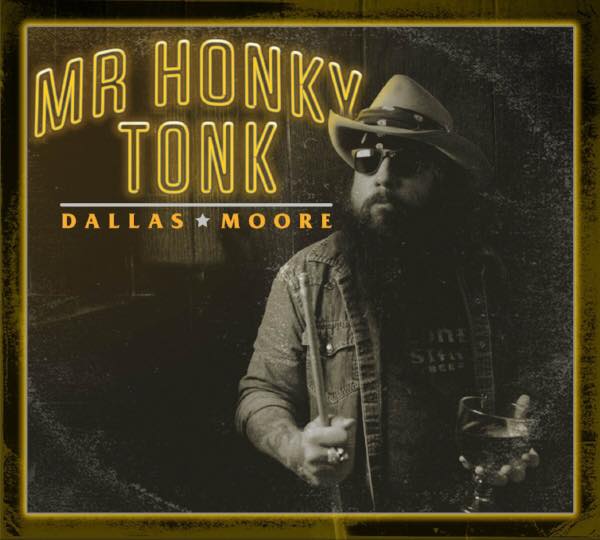 Long before the current crop of outlaws came out, we’ve had Dallas Moore and he’s been a favorite of mine in the outlaw country genre for a while. He has a new record coming out called Mr. Honky Tonk and I fully believe it’s his best one yet. At only 8 tracks and with a runtime under 30 minutes, this record is all killer and no filler. It is produced by Roger Miller’s son Dean who has worked with the likes of Chris Stapleton, Alison Krauss and even Merle Haggard. Dean has produced a hell of a record for Dallas Moore that is sure to go down as a highlight in his discography.

I have to start off with the lead single and title track “Mr. Honky Tonk”. I’m sure you’ve heard this one by now, but in my opinion it’s one of Dallas Moore’s best songs. I know I’ve been rocking it on my personal playlists since around last June. It’s one of those tunes that stands the test of time up against anything else.

Another good track is “Killing Me Nice and Slow” which is a rockin honky tonk number about drowning a broken heart in whiskey. If ya gotta go, that’s not a bad way, I guess. “Home Is Where The Highway Is” is a track about the touring life which Dallas knows a lot about. Moore and his band are on the road more often than not and show no signs of slowing down. The album closes with another barn burner in “Shoot Out The Lights”. This track features Mickey Raphael on some blazing harmonica.

You can’t go wrong with a Dallas Moore record if you’re in the mood for outlaw country. His new one is sure to be in a lot of CD players till the disc is worn out. This is his best record yet and it features my favorite Dallas Moore tune in the title track. Mr. Honky Tonk is available everywhere digitally on March 2nd, 2018 and you can pick up a CD from Dallas Moore’s website. There is a double album release party at the Nashville Palace in Nashville, TN on February 14th, 2018 featuring Craig Gerdes. Don’t miss that one if you’re in the area.

Favorite Tracks : Home Is Where The Highway Is, Mr. Honky Tonk, Killing Me Nice and Slow, Somewhere Between Bridges, Shoot Out The Lights

1. Home Is Where The Highway Is

3. Killing Me Nice and Slow

4. You Know The Rest

8. Shoot Out The Lights