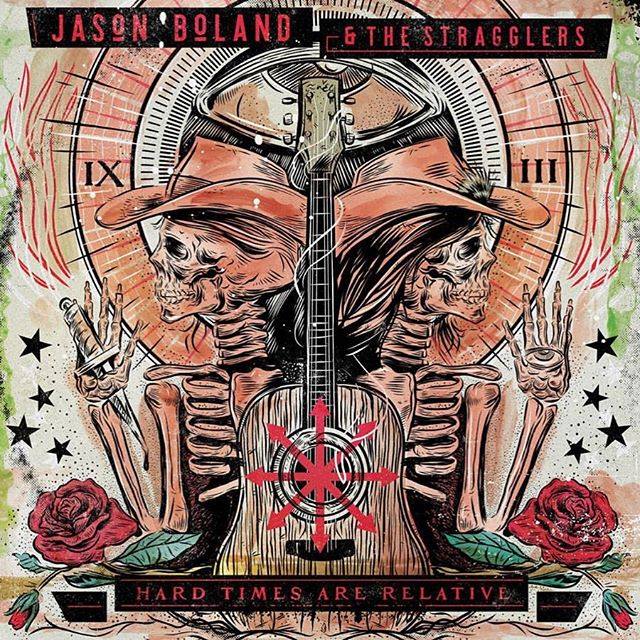 Jason Boland & The Stragglers are releasing their 9th studio album in Hard Times Are Relative.  It’s the follow-up to 2015’s Squelch and this one gives fans more of the traditional Texas country music they have come to expect from Boland and company.  This album is yet another great addition to a growing catalog of great red dirt and Texas country.

The album opens with a killer duet with Sunny Sweeney titled “I Don’t Deserve You”.  It’s one of my favorite tracks on the album and lets you know that you’re in for some good hard country music from the moment you press play.  Another favorite is the slower reminiscent track titled “Do You Remember When?” which reflects on better times in country music like when three quarter time was still a thing.  It’s one of the more creative approaches to this kind of track and I dig it.

Another favorite is “Tattoo Of A Bruise”.  This is one of the faster tracks on the album and I dig the fiddle playing by Nick Worley on this one.  Finally, “Grandfather’s Theme” gives you a sense of the album’s overall theme of looking back in the face of change.  It’s a good sentimental tune that is a highlight of the record.

Jason Boland & The Stragglers have put out another fine red dirt record in Hard Times Are Relative.  You can’t go wrong with this album if you’re a fan and this record is a good starting point for people who might not be as familiar with Jason Boland’s music.  At 9 albums in I believe it is safe to call Jason Boland a traditional country and red dirt legend as he just gets better with every release. Hard Times Are Relative is available everywhere on May 18th, 2018.

Favorite Tracks : I Don’t Deserve You, Do You Remember When?, Tattoo Of A Bruise, Grandfather’s Theme, Bulbs