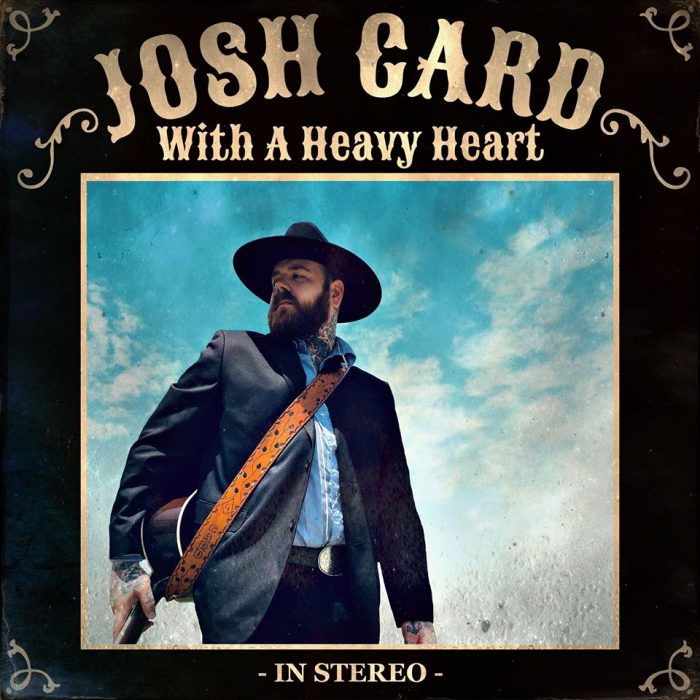 You might remember Josh Card as a guitar player for Whitey Morgan and The 78s or you might even remember his 2017 self titled album under Josh Card and The Restless Souls.  He is back and whether you want to call this a debut solo release or a sophomore effort, this album will make you forget about all that came before and you will simply know Josh Card as that guy with a killer honky tonk band from Florida who puts out amazing records.  He enlisted Dean Miller to produce With A Heavy Heart and this time around is by far superior to his 2017 album. This record is album of the year material and I’m saying that in a year with some amazing albums across the board.

You know exactly what you’re in for from the opening notes of “Suffer” when the whine of the fiddle and the guitars bring you into a honky tonk shuffle tune that sets the pace for the record.  Like a good opening act, this track will get your dancing feet moving as Josh ponders why he still suffers over a lost love.  Another highlight is the slower paced “Won’t Chase Your Love” which really showcases Josh’s songwriting ability. He tells a great story of a love which has died because a lover has given up his fight.

Further testament to Josh’s songwriting ability is the very personal tune “Forgotten Love”.  Like many of us, Josh Card has dealt with Alzheimer’s and this song brings that personal experience to the table and adapts it in a way that everyone who has experienced losing a loved one to the disease can relate to.  It’s a track that really pulls on the heart strings and it’s a subject matter that really deserves more time than it gets. I also really dig Josh’s take on the deep Neil Young track “Unknown Legend”. It is from Neil’s 1992 album Harvest Moon and Josh stays faithful to the original while adding some honky tonk flairs to the folksy country Young tune.

Josh Card has created one hell of a record in With A Heavy Heart.  2018 is a year that is quite heavy in good honky tonk and traditional country records and this is one of the best.  The songwriting is amazing and the players on these tracks are top notch. Dean Miller did a fantastic job with producing this album.  With A Heavy Heart is out everywhere on November 9th, 2018. Be sure to check out Josh Card on tour this month and beyond. We will have full coverage of his album release show this Friday in Jacksonville, FL at The Jacksonville Landing.