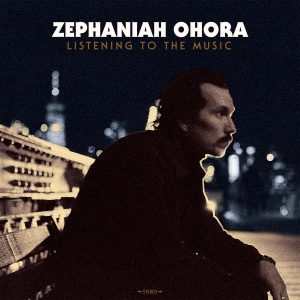 Zephaniah OHora is back with his second LP release following his stellar 2017 debut This Highway.  With This Highway, Zephaniah set out to prove that good country music could come from anywhere, even Brooklyn, NY. Now he’s releasing an album that solidifies his Bakersfield by the way of Brooklyn sound.  If you told me this was a record of lost Merle Haggard tunes. I don’t think most people would question that.  But no, this is an original record written by Zephaniah OHora except for a few cases where he has some co-writers.  Let’s take a deeper dive and see why this is likely going to end up one of my favorite records of 2020.

The album kicks off with “Heaven’s On The Way” which immediately displays some amazing pedal steel guitar from Jon Graboff.  The pedal steel is all over this record and it surely is a highlight whenever you hear it.  “When I’ve No More Tears To Cry” is a great lost love ballad that features and is co-written by Dori Freeman.  I particularly dig the electric guitar solo in this one.  Another highlight is “All American Singer” which sounds like something that would come off a Merle Haggard greatest hits record.  It’s a song that calls out the injustices of the day, but in the end recognizes that music is there to bring everyone together.

The track “Living Too Long” covers the classic country theme of how the good days are behind us.  It’s a bit more of an upbeat track, but Zephaniah OHora still gets the bluesy nature of the subject matter across. John Shannon’s electric guitar is a highlight here, and this is one of his co-writes.  I love how the track slows down a bit toward the end and has some great honky tonk piano over the last verse. “Riding That Train” is another upbeat track that has a sort of western swing sound to it.  It’s a great train song and you don’t hear as many of those these days

Zephaniah OHora has created one amazing record with Listening To The Music.  This album is much better than his stellar debut This Highway.  I was a fan of that record, but this album has more tracks that I’m drawn to and there really isn’t a bad cut here.  I hope to one day see Zephaniah OHora live, but you can follow him on his website.  Listening To The Music is out everywhere as of August 28th, 2020.

Favorite Tracks : Heaven’s On The Way, When I’ve No More Tears To Cry, All American Singer, Listening To The Music, Living Too Long, Riding That Train, You Make It Easy To Love Again

Zephaniah OHora – Listening To The Music (2020)