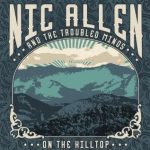 Nic Allen at Tootle’s Pumpkin Inn July 13, 2019
One of my favorite unexpected pleasures in 2019 was becoming aware of Nic Allen and The Troubled Minds.   I first heard Nic when he appeared as the opener for Eric Bolander at Tootle’s Pumpkin Inn in Circleville, Ohio back in July.   I really enjoyed his show and and thought songs were great, and speaking with him after the show, it turns out he’s a really nice and appreciative fellow.  He mentioned an album coming out and I kept on the lookout for it.  In September, it was released and I snapped up a copy as soon as I could find it.
The “On The Hilltop” album is an ode to Nic’s home, upbringing, family in Chesapeake, Ohio, and perhaps also to the trappings that go with being a honky tonk troubadour. He also gives more than a passing nod to his musical influences.  If you look up Chesapeake on the map, you’ll see that it’s just across the river from Huntington, WV (home of the notorious V Club, where Nic cut his teeth playing live shows), and not far at all from Eastern Kentucky.  Nic grew up listening to his father’s metal and his mother’s country CDs and cassettes while he was growing up on the road at Buffalo Creek where he still lives today, with his wife Melissa, about 500 feet from where he was raised. However, when you listen to this album, you can see that he’s also been listening to what’s been happening in the current blossoming Eastern Ky/Huntington music scene, and in fact, is now a part of it.
The album covers all the bases from hoedown stompers to southern rock/blues to tear jerker drinking songs.  Nic’s songs are top shelf, he has a strong country baritone voice, and you can tell as soon as the record starts that the band is all-in with his vision.  The production value is impressively high, especially for a debut album.
The album opens with a steel guitar fueled country burner called “For Heaven’s Sake”.  This one is a “gettin ‘ drunk” country song, and has a chance to become one of those songs that everybody in the crowd will sing along to with glasses raised.  What a great song to start the album with!
“Cheap Pills and Wine” and “Living This Way” are more in the vein of Lucero or Drive By Truckers mid-tempo rockers with themes of fighting depression and desperation any way you can, and they’re both powerful tunes both in the performance and content.
“Nothing to Hold” and “On The Hilltop” are both about lost love and the struggle to regain one’s self.  Yes, there’s drinking, but there’s also self reflection and regret.  Both of these songs are standouts and “Hilltop” especially, is simply one of those any serious songwriter wishes they had written!  Nic claims it’s the most personal song he’s written, and that it’s his wife’s favorite.   Probably mine, too.
“Home” is a flat out rocker, about the struggle of finding one’s way back home, both literally and figuratively.
“Worthless Man” and “Killing You Slow” are both slow burns that continue to explore the themes of self worth, self-loathing, and the request for some sort of divine intervention to intercede.  Even with the dark themes, they both, but “Killing You Slow” especially, maintain an air of hope and forgiveness along with incredible chorus hooks.
“Buffalo Creek” is about the place Nic has lived his entire life, and where he’ll be laid to rest when his time comes.  Extremely strong song.
“Just a Drink” is a slow country country tear-jerker with that killer steel guitar again.   It starts “Just a drink, a drink will do, so I can forget you tonight” and ends with a light at the end of the tunnel.   This, friends, is  a true country song.
“Waste of Time” is an acoustic guitar/vocal song that chronicles the hardships of love won and lost.  It showcases Nic’s strong baritone, and at times has some Dr. John-like deliveries, that I find I like very much.
Like the best country records, there’s lots of songs about lost love, drinking over lost love, advice from your father, praying for redemption, and finding one’s way home… and still leaves you with hope for the future….and all of those things are good things.