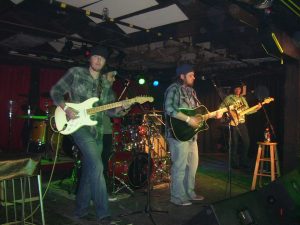 Well folks when I went to the Clarksville show featuring Shooter Jennings at the Warehouse I ran into this opening band. Folks I give you The Tim Lynch Band and he is from Clarksville Tennessee. I had heard of them but just never ran into them or got an opportunity to see them until then. I REALLY enjoyed his set and I got to talk with him for a little bit. He has a really talented bunch of guys playing for him and he has built quite a big following in this area. People I asked say nice things about him, and he also knew Wayne Mills so we share the memories of him.

I bought his album ‘Untitled” and he played one song in his set off that album it was called Walking Away”. I honestly thought his songs were raw and well written and his whole CD was real good. I enjoy his song “68 To Cadiz” cause I related really well to it being from that area. There were several other really good songs I found on the album I bought and I plan to watch him and follow him and support him more in the future. You’ll be seeing more articles on him for sure folks. I’ll be announcing any show dates he has in the future and tell you more on how you can support his music.