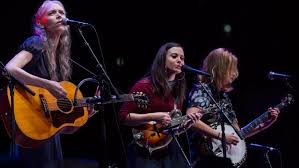 You know, much like young adults like Mr. Julian Davis, Mr. Billy Strings, and Miss Sierra Hull, the realm of Bluegrass has many exciting up and coming artists to quench even the thirstiest of palates. Miss
Molly Tuttle is no slouch when it comes to fresh originality and promise.

To be completely honest miss Molly is not EXACTLY new, she has indeed been around on various recordings in some magnitude. She released a small seven song EP called “Rise”, that recorded from a gofundme.

In 2018, she joined Alison Brown, Missy Raines, Sierra Hull, and Becky Buller in a supergroup. The quintet performed at the Rockygrass festival in Lyons Colorado on July 27, 2018. Initially known as the Julia Belles, the group later became known as the First Ladies of Bluegrass. Additional gigs were booked at Analog at the Hutton Hotel in Nashville on Sept 18, 2018 and the IBMA Wide Open Bluegrass Festival on September 28, 2018.

The First Ladies of Bluegrass are featured on the first single from a full length CD by Missy Raines titled Royal Traveler due out October 5, 2018 on Compass Records.

When You’re Ready, produced by Ryan Hewitt (the Avett Brothers, Lumineers), also features Jason Isbell on backing vocals and Sierra Hull in a guest spot on mandolin. The LP’s opening cut, “Million Miles,” is one Tuttle co-penned with Steve Poltz, who started writing the song in the Nineties with his one-time musical collaborator Jewel before the pair abandoned it.

When You’re Ready will be available on Compass Records April 5th.