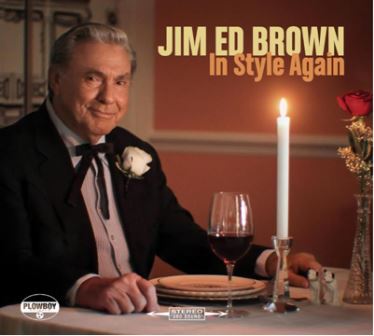 This past year my emotions ran wild several times with tears of joy because of several Country Music
legends releasing NEW Albums and continuing to be active.
Honestly one of my favorite Country Legends has always been Jim Ed Brown, and he’s always been
one of the remaining reasons why I continue to go to the Opry.

What Opry management considers to be ” the ones in the way” of the Opry are actually
the WHOLE REASON I STILL GO. Once the management or father time takes them all away
I really won’t even want to go to the Opry anymore.
What they don’t understand is that younger generations of people are TEAMING like
soldiers toward Country Music ‘s roots and Legends like these are highly revered.
AND WE SPEND MONEY!

January of 2015 Plowboy Records brings us the very first NEW album from Jim Ed Brown in thirty years.
I have to say this right now, I’m smiling and tears are rolling down my face in joy.
Because WE NEED THIS MAN with us..and this past fall it was announced by Jim that he is battling
cancer and is now receiving chemo and other treatments.
We have all been praying and wishing him well, but leaving him to fight. This 80 year old
man is one of our most prized Legends and in my opinion one of the TOP 3 we still have with us.

His website released a press statement from him “I guess the whole world does. It’s always good to hear a new song. I love what I do. People have always been great to me. They have accepted me into their homes and lives. It’s unreal what radio and television has done for me. I am a very blessed man”.

Jim Ed Brown joined the Opry in 1963 and had a number one hit with his sisters Maxine and Bonnie in 1959 with
“The Three Bells” and it stayed on the charts for 10 weeks.
He went on to perform solo (as he does now) and with Helen Cornelius he made several duet albums and in
1977 they won the CMA Vocal Duet Of The Year.

He is most noted for his 1966 hit “Pop-A-Top” which was also covered by Alan Jackson.
In the 60’s and 70’s he grew both lyrically and presence wise on the stage and became
well respected among his peers.