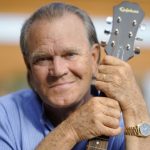 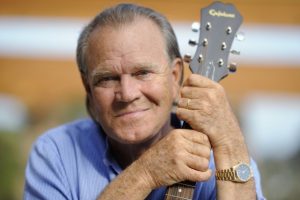 He was honored in 2012 with a Grammy Lifetime Achievement Award and also
was inducted into the Country Music Hall of Fame.
Glen has received almost ever accolade a performer can, and has released more than 70 albums.
He has sold 45 million records and accumulated 12 RIAA Gold albums, 4 Platinum albums
and 1 Double-Platinum album.
He has appeared in movies such as the original John Wayne classic “True Grit”.
He has been awarded male vocalist of the year and many many other awards.

On September 30th “I’m Not Going To Miss You” will be released as his last
single ever. Folks this will be just as epic as Ray Price, Mel McDaniels or
Eddy Arnold made their final recordings.

It was written by Glen and Miss Julian Raymond for his upcoming documentary
“I’ll Be Me” and was recorded in Los Angeles.
This song is loaded with weeping steel guitar and showcases everything
he has lost in life.

The documentary will be released October 24rth in New York and
then released nationwide the day after.
It was directed and produced by James Keach whom I understand also
produced “Walk The Line”.

In the past Glen has been one of the pioneers of the pop country
cross over pattern of his time.
Credited for being one of the forerunners of charting classic Country
albums and Pop charting at the same time, a pattern highly prevalent
in the 1970’s.