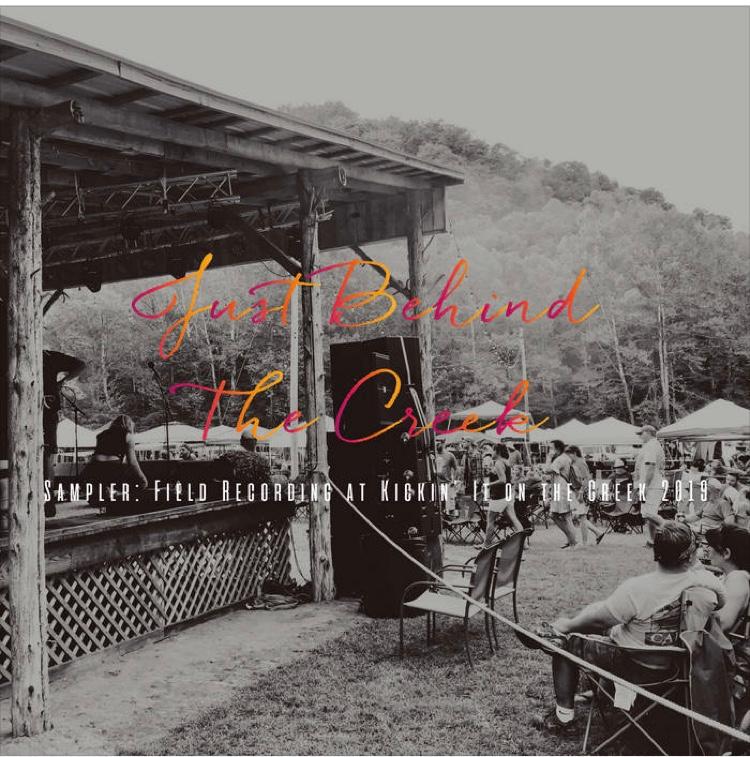 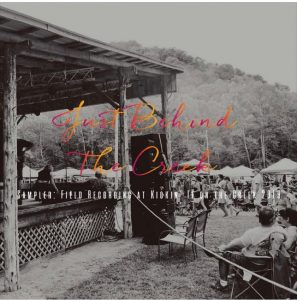 In order to get this review out quickly to readers who may be interested in listening to or purchasing this sampler before the April 30 deadline, I’ve copied and/or paraphrased some of this information from the project’s Bandcamp page.

This is a sampler collection for the complete Dolceola Records album “Just Behind the Creek: Field Recording at Kickin’ It on the Creek 2019”, to be released in September 2020.  The sampler offers 17 tracks played by as many different artists. All tracks were newly recorded on September 20-21, 2019, just behind the stage of Kickin’ It On The Creek.

KIOTC is one of the best music festivals in Appalachia and is organized by Byron Roberts of Wolfpen Productions and staged in Ross’s Creek, Kentucky, at Byron’s farm.  It features local and regional bands in the mountains of Estill and Lee County Kentucky, as well as practitioners of traditional music styles from all over the country. These recordings show a wide variety of music with renowned and talented musicians playing traditional tunes as well as their own beautiful original songs.

This digital sampler is currently available only as a download from Bandcamp through April 30th for a suggested price of $10.  100% of the proceeds go to musicians to help support them during the current COVID-19 crisis.  I have added links to artists’ webpages, where I could find them.  Please consider visiting the merchandise sections there and perhaps purchase an item or two to help out further.

Here is the link to purchase this recording.

I contacted Dan Torigoe of Dolceola Recordings (based in Japan) via email about this effort and he responded, “I first heard about KIOTC from a friend of mine…..while we recorded a banjo master Jack Bunch in London KY. I was very interested in this unique fest as it was focused on showcasing current mountain music with local artists. It perfectly fitted our mission, to document current situation of community-based music in the United States.

I also spoke to Byron Roberts about this project and he could not be more proud to have these recordings as a testament to just how wonderful the current music scene is in Eastern Kentucky and West Virginia.

Interestingly, these recordings were not planned in advance!  Dan simply showed up at the gate and asked if he could make field recordings of some old time music using his 1950’s vintage microphone and tube equipment.  Eventually he and Byron got together and turned the Roberts’ living room into a temporary recording studio.  Byron started spreading the word among the musicians present at the festival and before long there was backstage buzz about it.  They ended up with 35-40 performances from which the final album will be culled.

Byron wants to thank Dan for coming from the other side of the world to record music from this Eastern Kentucky festival,  and sharing the music with the world.  Further, he is thankful to Dan for offering to give all proceeds from the sale of this sampler back to the music community in the Eastern Kentucky area.

Music truly is a worldwide family, community, and uniting force.  I personally could not give this collection a higher recommendation.

2. Teresa Prince (from Luna and the Mountain Jets): Pepsi Girl- LATMJ vocalist/guitarist and “Honey” from the Laid Back Country Picker band performs a self penned pop tune acoustically, giving it a whole new Appalachian feel

Luna And the Mountain Jets

3. Brett Ratliff: Pass Around the Bottle-Eastern Kentucky musician plays banjo and sings a very old tune made popular by The Skillet Lickers. This performance would not be out of place on a Ralph Stanley album

5. Don Rogers: Greek Medley- one of my current favorite musicians picks up the fiddle and kicks it into gear.  Check out his work as a solo country/rock artist, his bands The Apostlebillies, Bluegrass Collective, The Green Genes and probably about 15 others he sits in with

6. Montana Hobbs (from The Local Honeys): I Love My Honey- Eastern Kentucky musician and member of traditional Appalachian band The Local Honeys plays banjo and sings this sweet tune

11. Sean Geil (from The Tillers): I Saw a Man at the Close of Day- like Macharet, he is also a Tiller.  The singer/songwriter/guitarist pulls out a Grayson and Whitter classic from the 1920’s and makes it his own.

13. Crownover: Alive (somehow)-Kyle Crownover is a very young, very likable, and very talented singer songwriter here performing one of his original tunes.  Never seen without a big smile on this face, you may have seen him on tour as Tyler Childers’ road manager

14. Jesse Wells: Muddy Creek- speaking of Tyler Childers, this fella plays in his band, The Food Stamps, and formerly (and still sometimes) a member of The Wooks.  This guy plays about 15 different instruments and if he’s in someone’s band, he’s the secret weapon.

17. Senora May: All of My Love- Eastern Kentucky singer/songwriter playing a great original tune here.  I highly recommend going to see her live if she plays in your neck of the woods.