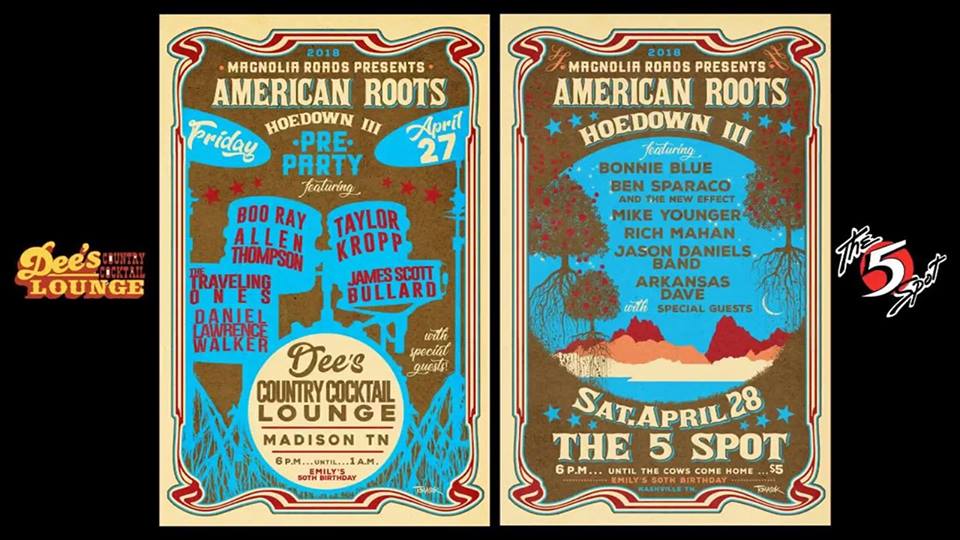 Once again I have traveled down to east Nashville to one of my favorite neighborhood bars, that is quickly become a mecca of local music. Miss Amy Dee and Mr. Daniel have turned Dee’s Country Cocktail Lounge into of the greatest retro throwback bars in the Nashville area.

I have gleefully written many articles from this particular venue, and tonight was perhaps some of the greatest sets I have witnessed there, by all means. I’m telling you that every act was amazing tonight and I had ONE HELL of a good time last night watching this show as I wrote this for you.

You can read about all of the artists and get tons more information about them all right HERE I also featured one of the videos from Mr. James album Full Tilt Boogie called “Jesus Jail Or Texas”, and you can see that HERE.
Also Outlaw Resurgence hosted the first listen party and you can listen to the album there.

The Traveling Ones played many Americana type songs like “When It Rains” and other songs that featured  their combined duet abilities well like “You Only Have To break My Heart”.  Mr. Justin and Miss Emily met at an open mic in Texas, and now reside in Nashville where they are a prominent part of my local scene here.

They have a special sound to their harmonies here, and if I HAD to compare them to another band I couldn’t..you have MANY combo harmony bands, Shovels And Rope, Porter Union, Barnyard Stompers…and these two aren’t like any of those.

The songs were well written and flowed well together on their set choices, like the song ‘I’m a woman” however the next song called “Wildfire Heart” was my favorite out of their offering last night.another outstanding thing about their set was it featured some damn fine slide guitar from the lead player, and when you pair it up with Miss Emily’s powerful vocal range, you have a damn fine show.

” Midnight Calling” was next and they followed that up with  a song called “Red Light” but like I mentioned about their set and how well it was placed..the set closed with a song called “Let’s Go Get Stoned”. It was a furious and powerful climax to the set and featured some powerful finishing vocals from her.

Mr. Allen Thompson is another local favorite we had here tonight, I first discovered him on Music City Roots. He writes with Mr. Don a lot and  one of his first songs was a song he wrote with him called “Dirt to Dust”. He brought a great acoustic portion to the lineup tonight which was also really nice.

“While I’m Young” was another song he played before he played his final song called ‘Trouble”. He later joined Mr. Don Gallardo for the closing portion of the entire show. He told a terrific story about how he was misplaced at a songwriter competition with kids once that the song “Trouble” won an opportunity to meet John rich..which he opted to give away.

Mr. James Scott Bullard is dropping his new album tonight called Full Tilt Boogie and you can read more about that HERE. Several websites have given Mr. James a lot of attention lately in the local scenes, and he has been out on the road working relentlessly.

He opened with “Lord Have Mercy” from the new album, along with the next song “Heartless Woman”. Mr. James has self admittedly proclaimed most of his songs are of the jaded type of love gone wrong, like the song “Warpath”. Now mind you, acoustic they sound a little different than on the album with a full band..but that’s alright.

Both times I went to see him play here he did a truly fine job up there, especially on songs like “Wicked Ways” tonight, hell it got an applause two separate times. More heavier tunes like “Evil Lovin” that had the different guitar tones made them sound different just acoustic.

“Voo Doo” was one I never heard live before and after that he played “The Next Tear” and “Hey hey Mama” both offerings from Full Tilt Boogie, I thought his set list here tonight promoted the album well.  He played a few more before playing “Back To You”. I particularly enjoyed his closing of the set when he played my favorite song called “Jesus,Jail Or Texas”. I have a pretty good feeling you’ll be hearing many more great things to come from this man.

Mr. BOO RAY was absolutely amazing tonight and it’s been quite a while since I have had the chance to cover his set live, so tonight was truly a great opportunity.  He has a new album dropping this fall and he played a brand new song from this forthcoming album called “Don’t Look Back”…I’ll have more on that on later articles.

His latest album called “Sea Of lights” was one of the focal points of his set tonight, choked full of bad assed guitar licks and steel guitar solos. This man and his band was absolutely mind blowing tonight in just about every way, his opening song was called ‘4 Letters And A Heart”, one of his older songs from the “Bad News Travels Fast” album.

“Johnny’s Tavern” is an absolute bad assed in your face foot thumping song about just what it’s named…for..Johnny’s Tavern.  His set also included “Bricks And Mortar” and “Emmaline”. This man goes absolutely full blown ballistic on stage, just because he is lanky in stature doesn’t mean he isn’t a juggernaut on sound. He blows the rooftops off of the venue!

“One More Round” was included in the set and my personal favorite from “Sea of lights” was called ‘Redneck Rock And Roll” which is just a plain out simple jam song. After playing two new songs, one being called “Don’t Look Back”  he closed with the song called “Bad News Travels Fast”.

Mr. Taylor Kropp was up next with some great twang guitar music here as he opened with an old Waylon Jennings song and went into an original off of his album ” Coming Up For Air” called “I’ll Forget In Time”.

He played his song for millennial called ‘Stereotypical Three Dimensional 21st Century Troubadour” , but the best song of his set was the title track of his album ‘Coming Up For Air”. His set featured some ABSOLUTELY amazing guitar wizardry, rivaling Rory Kelly and Sean K Preston on local stage levels.

Mr. Don Gallardo is one that I have been following for some time now and his new album is garnering huge accolades around town, as it also drops tonight here in town.  I have been a fan of his for some time now, and I finally got to catch his show here on the now.  I’m quite excited to see this man’s set tonight, he is a big local draw in my area believe you me.

He opened his set with the first single off the new album called “Stay Awhile”, and followed that up with other songs off from his album “Hickory”. “Diamonds And Gold” and my absolute favorite ‘The North Dakota Blues”, that’s just a terrific song that paints such a vivid picture in my mind. In fact I would go so far as to say it’s one of my top 20 favorite songs of all time, my interpenetration of a good song is that a writer and singer paints a picture on your brain, which is a canvas. That song just reminded me of being a young man and reading those old Louis L’amour books.

“Golden Rule” is another positive song about…well the golden rule, he followed that with the fifth studio album title from Van Morrison called ‘Tupelo Honey” Now I’ll be honest I’m not the biggest Van Morrison fan (I don’t hate his music, but I can take it or leave it) BUT I DID enjoy his cover of it. He does a fantastic job presenting the song as his own, and if you aren’t observant you could construe it as his own song.

“Time Pass By’ is a song he renamed “The Song That Made Mick Jagger Dance’, because well…it did once. That was a really cool opening story to a song, we had quite a few cool intro stories here tonight. He played “Banks Of The Mississippi” before closing with Grateful Dead covers like “Casey Jones”.

I want to thank Miss Emily and Miss Kim Grant for inviting me out to write about this event here and for Dee’s for always hosting great local music for my website to write about, and that DAMN FINE jukebox they have there.