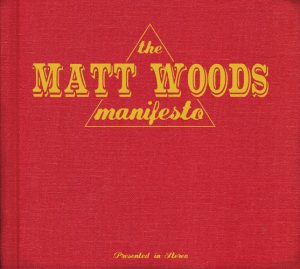 2021 is a landmark year for many bands and artists, and Matt Woods is one of them. This man, his music and especially this album have been inspirations to me and my website here. It is people like him that made people like me, and even though we do not see one another as often as I’d like to…I consider him a  friend.

In my opinion, he is vastly overlooked by many for the talented man that he is and his songs resonate vividly in my own interpenetration of his songs.  I still remember when he played “The American Way” at Muddy Roots, and how I felt like I WAS in that song as a forklift driver on a factory dock, See, because that is what I do for a living!

Back in 2006 (and the following years)  when I was going through my divorce I started to lean into music more than ever, and through the budding evolution of social media ( AKA the mighty MySpace) I found a plethora of bands, including him. I did not find him until I heard the Manifesto album in 2011, and when he announced the 10 year anniversary vinyl pressing I wanted to let my readers know it’s now on vinyl. What’s different about this edition? Here is the official release:

2021 marks a decade since the release of my debut full production studio album. For years I have wanted to have this pressed to vinyl and finally that day has come. We are currently in the pre-order stage of the album release and super excited to offer (for the first time) the Manifesto album on 180g red and yellow splatter! This is a deluxe double LP featuring the full album, which has been remixed and remastered, as well as previously unreleased tracks from those early sessions, including the audience favorite “No Beer in Heaven” which now has been bettered by vocals from my pal and yours, Adam Lee. “No Beer in Heaven” will be released as a single on Spotify and other streaming sites on Friday September 24th.

So be sure and FOLLOW NOW to not miss it! Along with the music, we also have some rad new merchandise in conjunction with the 10 year anniversary including The North Face brand knit hats and Bella+Canvas tees. Plus, I am offering limited numbers of handwritten lyrics to songs from the Manifesto. Be sure to pick your favorite soon before they get gone!

This album has four songs on it, that the original album didn’t have on it. One of his crowd favorites called “No Beer In Heaven”, which mentions my home town of Milwaukee ( I was adopted and moved to Nashville 20 years ago).  It pretty much is still a heavy drinking town but I recall in my youth the great jobs the breweries used to provide people, it was like coal mining was to West Virginia.

“Kind Of Gone” is a reflection of what used to be song, the kind of gone that never comes back home is a great line, and I thought this song was truly well written and easy to understand. Anybody can relate to it in their own way, however it speaks to you personally.

The other songs are called “Hammerdown” and “Ghosts Of The Gospel” are the other two songs on this album, that were not on the original album, and now that it is on colored vinyl, I would be remiss to not include it in my collection!