THE ERNEST TUBB MIDNITE JAMBOREE IS THE SECOND LONGEST RUNNING RADIO SHOW IN HISTORY.
WE INVITE YOU TO BE A PART OF THE LIVE AUDIENCE SATURDAY NIGHT AT 10:00 PM.
ADMISSION IS FREE AT OUR TEXAS TROUBADOUR THEATRE.
THE SHOW IS BROADCAST ON AM 650 – WSM AT 12 MIDNIGHT.
ALL SHOWS AND ARTISTS SUBJECT TO CHANGE WITHOUT NOTICE.
PHONE 615-255-7503 – PLEASE DO NOT CALL UNTIL THE WEEK OF SHOW.
MC OF THE MIDNITE JAMBOREE IS JENNIFER HERRON.

I keep up with so many ongoing Country Music function, that it would be ludicrous to continuously focus on the same acts and the same community time after time. Not only would it become mundane but it would copy too many other websites out there covering the same content, and it’s been quite some time since I took a fast jaunt down to the Midnite Jamboree.

Anybody that keeps up with Texas music and the ongoing spat here can tell you the age old argument of “There is no real Country in Nashville” ( YAWN) can easily tell you that if you look and listen to the right avenues you can find some TRULY GOOD Country Music here in town. It’s just totally ignored by those people that want to gripe about it.

Mr. Joe Rucker is one of my local friends that I have known for years and is enjoying his two girls growing up while playing music locally. he isn’t one of the many road dog touring bands I know, however he has many years of shows and music under his belt. Make no mistake that beneath his gentle and easy demeanor lies a raging Country Music beast, that like me salivates for steel guitar laced Honky Tonk sadness.

Every week this show begins with music from the great legend Mr. Jimmie Rogers whom Mr. Ernest Tubb idolized along with others like Mr. Merle Haggard. There are many breaks and recordings as Miss Jennifer Herron advertises new products for sale in the store, and online as well.

Mr. Joe played the Harlan Howard classic “Above And Beyond” that Mr. Buck Owens released in 1960, additionally Mr. Wynn Stewart garnered much commercial success from the song in 1967 on his album he did for Hilltop Records. To find that album is a top find for vinyl collectors abroad. Another song he played that REALLY sparked my attention tonight was “House Of Blue Lovers” from Mr. James O’Gwynn. He was a VERY obscure artist active in the early 60s produced by Mr. Pappy Daily, who was one of the many producers that were patient enough to work with a young George Jones when he was insistently inebriated.

He played an original called “150 Old Mims Road”, a song about his Grandparents whom lived across the street as he grew up. He is cutting that song on a new album coming in August, along with a few more he said. Along with his band that consisted of Mr. Pete Finney on steel guitar ( Reba, The Judds, Patty Loveless and more), Mr. Rob Price on bass (Gail Davies, Crystal Gayle), Mr. Rick lonow (Poco, Flying Burrito Bros.), Mr. Will Barrow on keys (Suzy Boguss) and Mr. Andy Reiss on guitar whom is a legend in his own right, Mr. Joe played songs like “Happy Hour Blues” by Mr. Jim Glaser. 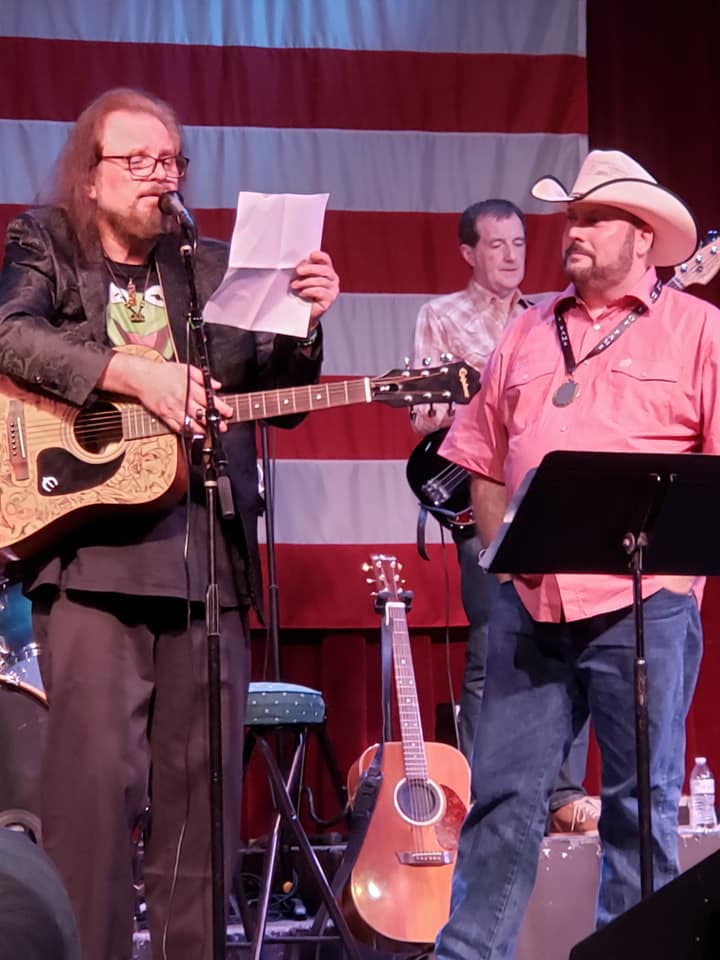 Having been mentored at an early age by Country Legend Mr. Hank Locklin he showed his affection for his late teacher by playing “Send Me The Pillow” one of his most beloved classic songs of all. Initially the song did not chart, and it wasn’t until he made a 1957 re release of the song for it to chart at 5th. He also played the Red Foley version of “Peace In The Valley”, before receiving an honorary award from the ALM nashville Chapter.

The ALM is the Acadamey  Of Local Musicians  that recognizes local artists in different communities across America for their contributions to the art of music. Also there was a great advertisement for the new Gospel album from Mr. Tony Booth on Heart Of Texas Records, I love what Mr. Tracy Pitcox is doing out there in Texas.

Country Legend Miss Margie Singleton is a very special performer to me right now, as she is one of the last remaining people whom were signed to the Starday label in the late 1950’s. Along with her late husband Mr. Shelby Singleton they produced and wrote more Country music that I could name in a short article like this one.

She performed her famous song that Mr. Brooke Benton cut called “Lie To Me”, that he cut in 1962. She also played a wonderful Gospel song called “The Road To Damascus”. I distinctly remember her from the movie Road To Nashville with Mr. Marty Robbins and others I used to enjoy as a kid.

The final guest was Mr. Guy Gilchrist, whom played a song he wrote with Mr. Jimmy Payne called “Angel In Black”.  Mr. Guy was the original designer of the muppets for Mr. Jim Henson, and he drew for the comic strip of Nancy for years. he is also a great Country Music songwriter in his own right.

NOVEMBER 9
RIDERS IN THE SKY
Broadcast #3786