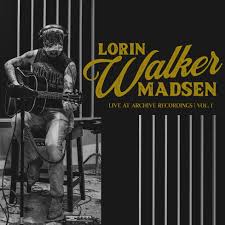 I recently had the chance to stop and chat with my good old friend Mr.Lorin Walker Madsen, who has new music out now. I wanted to stop and share with you the conversation we had VIA instant messenger as of late.

This album is a gathering of new songs except the song “Colorado Man” , which was on the album “The Kind Of Man I Am” from 2013. The other 3 songs are all new, and he will explain of that below:

Lorin Walker Madsen “LIVE @ Archive Recordings” Was recorded back in late January 2020, just before the world would change and shut down due to the Covid-19 pandemic.

I was coming off a short run of shows in Southern California and had a few new tunes that I knew I wanted to eventually record for the next record, but had most the guys there, and available, so I said what the hell. Why not, ya know?

And now, I’m glad I did. The players and band for this live session was built of Taylor Flandro (fiddle/vocals), Raymond Mathews (upright bass), and Eric Watson (drums). My long time friend and owner of Archive Recordings here in Salt Lake City, Wes Johnson manned the helm and engineered, mixed, and even mastered these tracks.

He also tracked and engineered my 2017 release, “Slave of the Road”. We’ve known each other know over twenty years, growing up in the Utah music scene. We’ve now become just great friends who like to fish together and just hangout on the regular (pre Covid of course), but he’s someone I’m extremely comfortable with and trust.

So it was fun to lay these new ones down with him, and anticipate him being apart of the next studio release as well whenever I can get everyone in a studio and room safely again. Three of the four songs from this live session are previously unreleased, and the fourth being a full band version of a song from my debut solo release in 2012 “Colorado Man”, one that I’ve always wanted to put together a full band arrangement for but haven’t for whatever reason up to that point.

The other three unreleased tracks I mentioned I would like to see on a studio release as well in the near future, along with a handful of others that I’ve been sort of been sitting on or cooking up during this quarantined time at home. So again, once the opportunity to get together in a studio environment safely again with the crew you can expect a proper studio record. Most likely a full length.

Other than that, I’ve been spending the last ten months at home in Utah soaking up the extra time off the the road with my little boy and wife. Fishing and enjoying the outdoors as much as possible, and getting back to working on songs for the love of writing songs and playing music.

Sometimes you looses sight of that when you’re spinning the wheels out on the road day in and day out. “LIVE @ Archive” is currently available on all digital streaming and downloading platforms