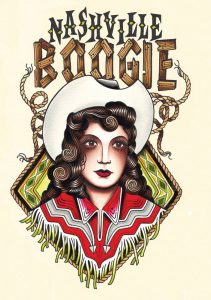 The evening kicks off with local “Honky Tonk Tuesdays” revivalists from the American Legion Post 82, East Nashville’s very own The Cowpokes!

Looking to attend the rest of the festival? It is $135 for Thursday through Saturday which includes 90 bands, an indoor car show, a vintage market, western fashion show, pinup contest, and a vintage western slide show. You can come to the car show and vintage market for just $5 if you don’t have a festival ticket. We have a cool record convention Sunday from 9am to 6pm at the Nashville Palace which is included in your festival pass or just $5 to the public. ALL BANDS AT THE NASHVILLE PALACE ARE FREE ADMISSION! 10 am to 2am.Day and weekend passes available at:
http://www.nashvilleboogie.com/

This is what happens when locally owned Muddy Roots Records takes over the Grand Ole Opry House Mr. Jason brings rare and obscure Legends nobody within the realms of what the normies call “Country” even know exists anymore. Country Legend Bobby Bare has played the main Muddy Roots field twice now, but Country Legend Jerry Jeff Walker hasn’t played a full show in Nashville in over 25 years.

He is most popular for writing the song “Mr. Bojangles” which was recorded by the Nitty Gritty Dirt Band on their most famous album Uncle Teddy And His Dog Charlie. That vinyl album contains a very rare 15 page fold out poster collectors deem valuable and critics deem politically bad because it features old pictures not acceptable in today’s society. He recently performed with the NGDB for their 50th anniversary at the Ryman Auditorium for their groundbreaking album 50 Years Of The Nitty Gritty Dirt Band.

That song was entirely truthful and albeit hard to imagine he actually did meet a white wandering minstrel in the 1960 that he befriended in jail in New Orleans, at one time he pointed out in a radio interview jails were segregated then and this vagabond was white.  He also gained fame for writing “Up Against The Wall Redneck Mother” for another Legend Ray Wylie Hubbard as well as songs for Guy Clark and Gary P Nunn.

Bobby Bare was quite possibly the first and most vastly overlooked member of the Outlaw Country Music movement with some boasting Waylon and Willie and have no clue to what contributions Bobby Bare actually gave this theme of self creative control over their own music. Bobby Bare often joked he BARED no resemblance to the Outlaw look but released album like “Drunk And Crazy” and made writers like Shel Silverstein famous by recording entire albums of his work.

Bobby enraged the industry at the time by recording a John Denver song in rebuke to their attempts to market John Denver as an answer to rapidly climbing album sales from Outlaw artists. He often invoked ire from venues for smoking on stages and encouraging crowd participation during his song “Song Of The South”. He also recorded a song by my friend Tom Ghent whom is also deemed a Legend called “Easy As Dreaming”  included on the album Drinking From The Bottle.

Joshua Hedley is currently on tour now and I visited with him recently at his performance at the Nashville Palace and also appearing will be J.P.Harris who along with his band the Tough Choices are a sure bet for Honky Tonk fun and a often visits Muddy Roots events.

Deke Dickerson, Billy Harlan and Big Sandy are also staple members of Nashville Boogie appearances and I very much enjoy coming down there to see them play. I wrote some fine articles for Billy Harlan you can read HERE. I have included all three of their sets during my Nashville Boogie coverage in the past two years.