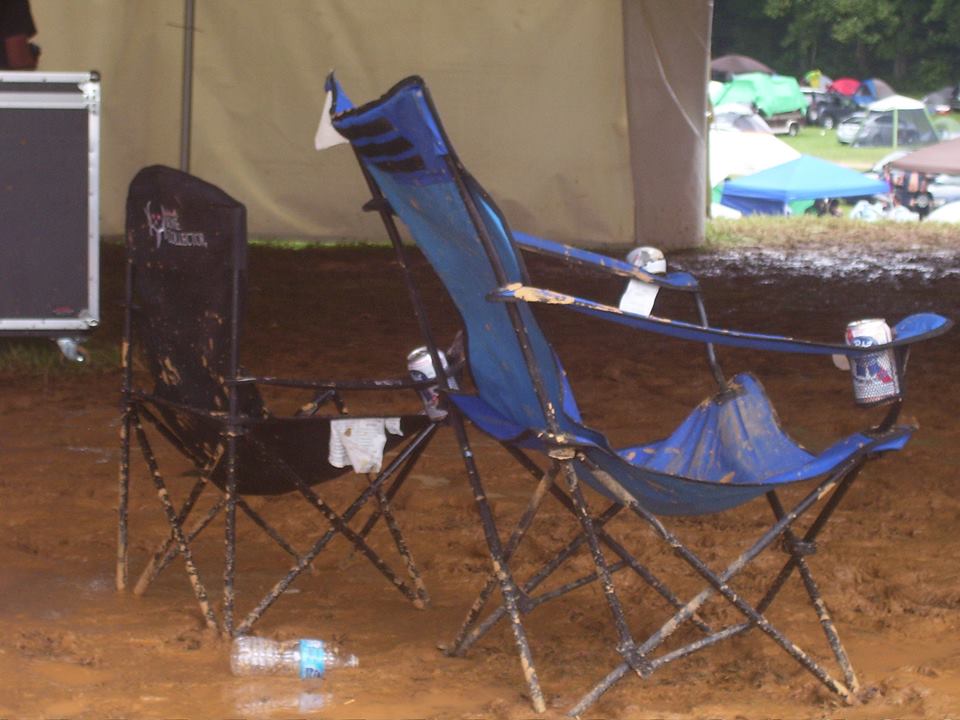 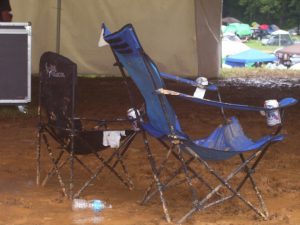 I need to tattle on Mother Nature to Mr. Jason..she came and did not
pay to get in!
Did I come prepared for the rains? YES. I brought 5 chairs and 2 rainsuits
and boots and SOCKS, LOTS of dry socks. And my feet STILL got sores and swollen
form three days of walking and being wet.
I had over 100 pages of notes when I was done Sunday and keeping them dry was
REAL hard but I managed to somehow do it.

I got there around noon on Saturday and it was dry still however the weather
was looming in the distance and quickly coming!
I was WELL fed from the free spread the hotel puts out and WELL rested
from around twelve hours of sleep.
I was really sorry I missed The Tillers and Pokey LaFarge, however I had to
make rational decisions and take care of ME first..I’m just getting over
being sick. And when I get sick it’s NOT sniffles I get SICK!
All that weekend I did not drink any beers cause of the heat and weather
and the fact I had to drive.

So my first band I had on my agenda was Tilford Sellers And The Wagon Burners.
I had previously missed their set when they opened for Sarah Gayle Meech
at The Spillway in Kentucky.

His album was on my “To Purchase” agenda for sure.
He has a three piece band and his steel guitarist is
a powerhouse on the damn thing. However I’m not sure if the same
guitarist he had with him was the one from his album and I had his name
wrote down and it got lost amongst my jumble of information.
ALL WEEKEND I got to hear some GREAT steel pickers, MAN!
He opened his set with “Give It Up” and another good Honky Tonk tune
“If You Got The Time”.
I was really enjoying his set as this Indiana native was performing some GREAT
Country Music with us, I’d travel to see this man..I really would.

“Taking All My Kisses” has a really good steel guitar intro
and I am STILL enjoying his album in my player now!
That song was on repeat for quite some time.

“Get Ready” is an uptempo song that I also enjoy and he played
“Heart Broken Baby” and a Buck Owens cover “Truck Drivin Man”.
That song was cut first by Terry Fell in 1954 or 55. Buck Owens was
in his band “The Fellers” and in 1965 he cut the song with the Buckaroos.
I think Terry Fell got into some legal issues over the “Fellers” name
and had to stop using it…I’m not sure I’m 100 percent correct on that.

He played one called “Tn Moon” and one I didn’t catch the name of
it was possibly “Oklahoma Baby”?
It was a pretty damn good swing song if I remember correctly.

He closed his set with ‘Two Timing Momma”.
And I want to touch on one thing about his album “Heartaches, Lies and Cheating Songs”.
There is a short steel guitar instrumental called “Sippy’s Lament” that
was REALLY good.

I hung out sidestage and talked with him and got to finally meet him
and wished I would have got to chat with his steel picker but I’ll
keep that in mind for another time later.
I’ll be SURE to catch their show in the future.

ANOTHER band I wanted to become more familiar with I never had
a chance to see yet was a string band from Michigan.
Rickett Pass was a pretty damn good set!

They were a really nice bunch of guys and their mandolin player
actually took my picture with Tilford Sellers.
How many musicians would actually do that for you and another musician?

“As Fast As You Can” was their set opener and it was a good choice for
an opener in my opinion. They are a pretty good fast paced high energy
string band.
“Not My Fault” and “Hold On” we both next and the fourth one was a new song,
I didnt recognize it or catch the name.
In their defense they did announce the name but I was visiting with somebody
If I’m not mistaken.

“Let It Ride” was next and then they got Buck Thrailkill up for some playing.
I ALWAYS ENJOY Buck Thrialkill both as a person and on stage preforming.
I did not catch the last songs of the set cause I began having some really
goofy camera problems. I remember hearing “Can’t Scare Me”, all together it was a
really enjoyable set. Good choice in songs I was well pleased with their
performance.

Then I headed to stage 2 and stayed there most of the night for two reasons
1: My bands I wanted were all in stages 2 or 3
2: It rained…hard…
I think that may have been the root of my camera problem and from then on
it was “hit or miss” with my electronic equipment.
You GOT TO remember THIS festival isn’t high fillutin with Wi Fi and cell phone
signals! This is ALL DIY and out in the sticks. I did ALL THIS reporting with
these ancient tools called pen and paper.

Mother Nature came to Muddy Roots. And I’ll tell you all about her in just a few!