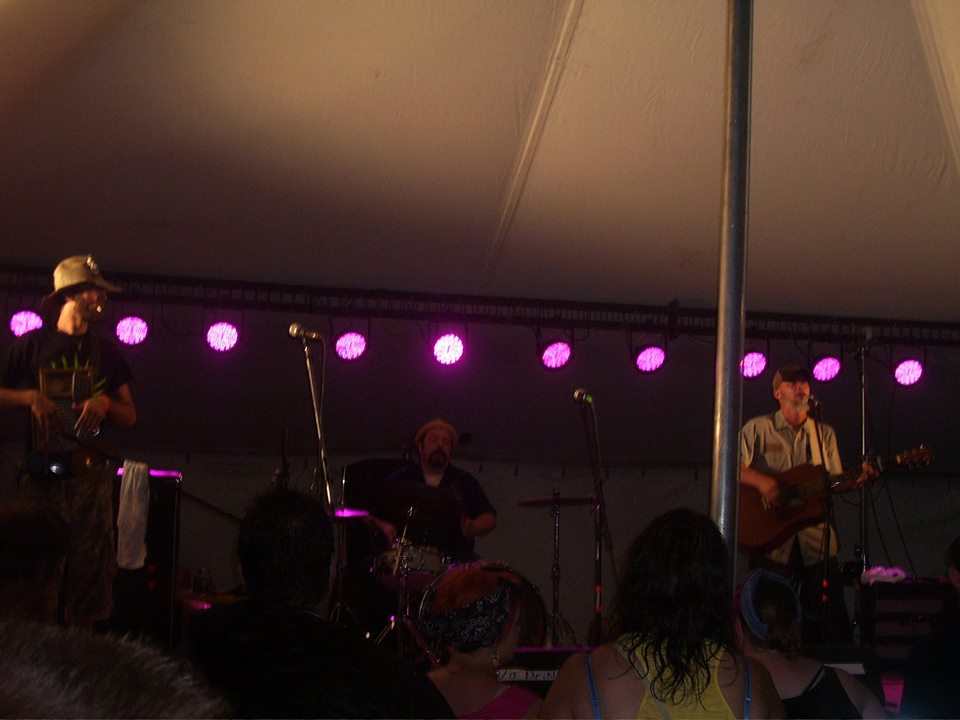 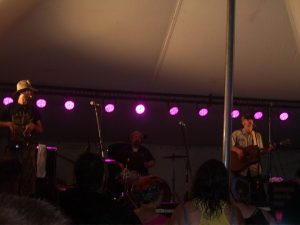 Now where was I?
OH YES the rains came and they came full force, much like in 2011 when Joseph Huber
was on stage 1 and played “Flood’s A Comin” and it rained.
I stayed my butt in tent 2 and watched it rain, for several hours it downpoured
and the mud crept into the tent slowly.

The rivers appeared along the sides of the main hill that is vendor alley.
One of the volunteers on a tractor was working all night pulling people out
of muddy ditches and helping out festival goers.

While I waited for my next band I was wanting to get see The Glade City Rounders.
Now I want to say this, when I researched these guys I was impressed because
of their singer and banjo player Squirrel.
Richard McLain holds true to the style and antics of whom I consider Country Music’s
first superstar..Uncle Dave Macon.

You know a lot of people argue with me and say Hank Williams (who actually was
the first to bring it to the mainstream public) I’ll agree. Or they say Roy Acuff
but In my opinion it was Uncle Dave Macon who was the Opry’s first star and our
first person to shine in the spotlight before TV even came about.

I LOVE to study people from the Opry’s beginning like Edwin Craig who actually used
his money to FUND the idea George D Hay had of the Opry.
I study people like Humphrey Bates (who I mentioned earlier) and Uncle Jimmy Thompson
who was the first person on the Opry.

The Glade City Rounders are a real deal folks, these guys just flat out rock the old timey
classic look and sound. It is natural to them..you can see it and hear it.
These guys were not barefoot because of the mud.

“They’re After Me” was a song that’s on their sampler CD and Mr. Jason sent it
to me in the mail some time ago in a package.
Now THIS really grabbed me they played an old time fiddle tune called “Grey Eagle”
and the moment I heard it I though of Am Stewart who was born Ambrose Gaines from
THE VERY ERA I am studying about!

Folks there is SO MUCH HISTORY in this bands being on this planet and they NEED to
be known about! This Appalachian history and how it all pieces together is so
interesting!

“I don’t Love Nobody But Me” was next and they played a really fun toe-tapper
called “Tickle Britches” that I really enjoy and I’m actually sad it wasn’t
included on that sampler CD.

“Can’t Get That Stuff Nomore” was another good song and they also included a
jug in their band. Which is one of the reason I love Leroy Troy so much, and I
can tell they are influenced by the same people.

I stayed in the stage 2 tent and waited for them to bring on the next artist I REALLY
ALSO was looking forward to seeing Sweet GA Brown.
This man and I talked on Facebook and we got along GREAT and also
we have the same first and middle names.

It RAINED and it rained but inside stage 2 I was about to embark on my
ABSOLUTE FIND of the weekend songwise…I Broke Wahoo’s Leg
which is on his CD and included in his set.

I had been wanting to finally meet his drummer Dave Dowda we talked alot too
and it was pleasure meeting him and his family. What a wonderful man he is
passionate LOVE of records (like me) and just a downright talented guy.

The power kept going out throughout the night and slowly all three stages
eventually fell behind schedule and it was NOBODY’S FAULT.
Muddy Roots did a doggone fine job of getting the music heard even though
I did miss The Shack Shakers..I’ll explain that later.

“Aint Goin Out Like That” and “1 Dollar 2 Dollar” were great tunes and
I was held down tight by this man’s creativity and straight forward
in your face blunt attitude.
It’s for certain this guy is for real, and he’s coming to kick some ass.

But the SONG OF THE WEEKEND the one most WELL WRITTEN and creative song
I heard ALL WEEKEND was this one and I’ll post the video for it.
“I Broke Wahoo’s Leg” was absolutely a foot stomping Outlaw Anthem
that couldn’t get any more “I’ll kick your ass” than it does.

The place was screaming so loud that I wasn’t able to hear
“My Baby Smells Like Weed” go enough and I wished it was on his CD.
HINT HINT Buddy…record it and I’ll buy it.

“Wordsmith” was another GOOD song that is the title of his CD and
I had it on repeat along with a few of his other songs on the CD.

James Hunnicutt’s set was cut a little short and I’m going to see
him tonight and I will report on his set in Day 2 Part 3.