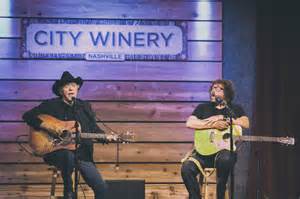 Well It’s been announced for sure on Saturday November 8th at Nashville Music City Winery
they will welcome Bobby Bare Sr. AND Jr. Together for one show.
Before reading the rest of the article if you know these two and you want tickets
you can buy them HERE. I will tell you my readers some info about these two country music powerhouses.

Bobby Bare Sr. recently did a REALLY GOOD set at Muddy Roots 2014 that in my opinion
was one of the TOP 3 SETS of the entire weekend.
I was there and I covered the set and some of the rest of the festival, my coverage of Bobby is HERE.
And that will take you to the other articles for that shindig.

Bobby in many historian’s opinions was the first “Outlaw” and the first to break down
the barriers to form his own sound AND make it commercial.
Bobby Bare, Chet Atkins, Jim Reeves and the Anita Kerr Singers made the first ever commercial
Country Music tour of Europe, playing to sold-out crowds at some of the biggest venues there.
Bare returned to Germany the following year for three months and has toured overseas almost every
year since, establishing himself as one of Europe’s most popular American Music artists.

He has released 38 solo studio albums and has had 13 top ten singles.
He has released two duet albums with Skeeter Davis and Roseanne Cash.
His only number one hit was “Marie Laveaux” and he has recorded many songs
written by Shel Silverstein and Tom T Hall. Also the man that wrote “Drop Kick Me Jesus”
Paul Craft recently died.

My first encounter with Bobby was for a benefit show at the Troubador Theater for
Don Helms. Bobby signed autographs later and was very nice to us all.
I have many pictures and signatures of his.
And just recently he was inducted into the Country Music Hall Of Fame.

Bobby Bare Jr. was on Hee Haw as a boy to help provide the witch scream on his
song Marie Laveaux. Many of today’s children were on the set in our own childhood.
However he admittedly did not get out into the music realm until about 30.

He has 8 full length albums out and when he was only 8 he and his father were
nominated for a Grammy for their song “Daddy What If..” which reached number 2
and written by Shel Silverstein.

He has a degree in psychology from the University of Tennessee
and regularly plays shows in town a lot.
I have not gotten the chance to see him live yet but he is on my list of
“to-do” shows for certain.