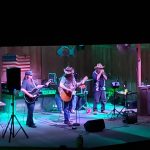 This first half of 2020 has been absolute chaos for everybody, and I have been no exception. I have spent the entire year taking care of personal issues, and family issues the same. Pretty much all of us have been held up at home and left to wonder what will happen to us as a nation, and when will things return back to normal?

One of the major things I have been missing for the year is live music. So, when I got word on social media that the almighty Outlaw himself Mr. Dallas Moore was rolling in to play a show I HAD to come down. Much to my surprise one of my favorite up and coming acts Mr. Tony Logue would be the other act.

Breaker’s Marina is a beautiful venue built on the Tennessee river that offers a wide variety of fun for everyone, and we had a very fun time there. The actual marina itself keeps different hours than the dining area as far as I could tell, and you can rent various types of watercraft there.

The stage area was built really well, complete with a back line riser and plenty of utility outlets for a full band.  One really cool thing I noticed, was the sides of the stage had windows for air but also to make loading and unloading equipment much easier.

Really, the only drawback I could see was a lack of a backstage area, and unless the artist doesn’t mind a lack of a greenroom, this place would be ideal for anybody really. I want to talk about the food, folks the food IS AMAZING! Now, it’s more middle ranged price wise ( which I didn’t mind to support the venue to pay the band ). Everyone has to make a profit, while the music is on…and if you read my website, I KNOW you ARE on the same page.

Folks, PLEASE GO support this venue so they can have future shows, and I can go back there for more articles in the future. If my pictures and my words don’t convince you to go, then it’s futile to read further into this portion of it. The owner was VERY genuine, and his staff was VERY KIND, just REAL down home people that will go out of their way to make YOUR meal the BEST.

The first act was a weekly staple at the marina, and one that I have encountered once before. Now, to be honest I have been to so many music functions, and with so many bands I cannot recall just where we ran into one another? He didn’t recall either, but Mr. Johnny Mac was a nice treat tonight.

He has some original music for sale, and also entertains a crowd with cover songs equally with his own personal flair. He played some pretty mean guitar licks on those cover songs, and also they had HEART..he wasn’t just rambling off lyrics to people. This young man LOVES Country Music like WE DO, he lives it like we do.

He has an album called Mac Two that boasted an original song he played called ‘Show You Love”. Along with that he did a Jason Isbell song “Cover Me Up”, which declares his love for Miss Amanda Shires and forsakes his former self. Altogether, he played for hours with other original tunes with various covers.

One of his originals called ” Haggard Songs” was really well composed, and inadvertently declares that 30 yeas from now, he will still be singing Haggard Songs…like his cover of the 1977 classic song from the album of the same name.

I have been ardently watching Mr. Tony for the past few years, and watching hm grow both on stage presence and as a songwriter. When he puts on a show you are in for a real treat, and you will hear some gritty, true to life songs that lament real life troubles and tribulations. Many of his songs speak to me as an individual, and my life at a factory, and out in the country.

He opened with an old Drive By Truckers tune called “TVA” from the 2009 Fine Print album, all of the covers he does, he does them total justice with passion. He possesses a REAL Western Kentucky grit to his soul, and when you watch him play, you ARE SO engulfed in his lyrics.

“Cutt Riley’s Daughter” is a poignant murder ballad about a country boy that marries an abusive man’s daughter, and serves time for killing him. I cannot ruin the entire song for you, you’ll have to delve into it yourselves at one time or another.

“Jenny Ridge” is a ghost story about the spirit of the woman whom searches for a child out in the hollars of Kentucky. I know for an absolute fact that Mr. Tony could fit in well with some of the Appalachian artists or the folk artists in the Midwest, that make up John Hartford Festival.  Hell, I could see him dominating Muddy Roots too.

“Calloway County” was on his set list tonight, as well as “Welder” and a cover of “I’m On Fire”. However, one of the songs that struck me as a listener more was the Chris Knight cover of “Not Enough Rope”. the lyrics are so poignant and dark, but at the same time it is a song about honest everyday life.

“Deadwood” was played tonight, as well as another of my favorites called “Reckless Kind”. That song tells about a young man growing up hard headed into manhood, and all of the wrecks and mistakes he makes in youth. I believe many of us remember wrecking cars, and drinking underage or legally and making mistakes like that? Fights….Lord I been stabbed and cut up from fights myself, I AM AN ADDICT and I’ll always be one…sober 110 days now.

Toward the end as the sun went down he ushered the dusk into the river with songs like “The Storm”. Being a factory worker, I can readily relate to this one myself. I’m actually going through some storms now myself here at home, and people like me choose to lace up our work boots and stand in the storm.

Prayer and hard work makes all your life problems get better, but this man’s anthem to the modern day working man is just what society needs for uplift. He also played some new songs called “Silas” and one called “Baptized” about the Cumberland River.

“Life’s Blood” was one about folks getting kicked out of LBL, which is Land Between The Lakes..a popular area that not only spans West Kentucky but Tennessee as well. Now, upon talking with Mr, Tony more, he plans to go into the studio in August and September time spans for his new album. We will keep our eyes peeled on this one!

Mr.Dallas Moore is another name to watch this year, as he has a whole new album in the bag and played some new songs for us tonight. I will be one of the first to announce that the name of the new album will be called THE RAIN. This new album will be on Sol Records  He began the show with a heaping helping of old  tunes first, before going into some new ones.

Off the 2016 Live at Bullitt County Jail album they played “One More Ride”, and steamrolled right into a song from Mr. Honky Tonk called “Shoot Out The Lights”. When I first met Mr. Dallas in Altamont ( which inspired him to write ‘Up On That Mountain” ) he was touring in support of his 2013 album Blessed Be The Bad Ones. that album contained the song “Texas Tornado”.

His bad assed blend of Country and other forms of music make so many fans flock to his performances from California to New York. He draws big crowds wherever he goes, and he has had the good ol Snatch Wranglers backing him up for YEARS…folks HE IS A local Legend to me.

“Bottle And A Bible” shares his enthusiasm for imbibing in whiskey as well as sharing his love for God with us. That was instilled into him at a young age by his parents. He recorded an old time album years ago with his mother, and I was one of the many fortunate ones to have known her on social media.

After he played “Raisin’ Hell And Slingin’ Gravel” he went into the new songs, one called “Locked Down And Loaded”. It was another classic Dallas Moore thumping Outlaw song, as well as a re done version of an older song called “Blue Jean Jesus”. That song is from a old album called Untold Stories, and if you can find it, it is a RARE FIND to collectors like me.

Some of the new songs are as follows ‘Better Days”, which was a lament from a common person weathering some of life’s problems. It’ll get better, and this song calls out for that hope from him. “Every Night I Burn Another Honky Tonk Down” is another powerful song about Mr. Dallas’s travels all over America.

They TRULY DO burn Honky Tonks down every night for years! And they go “On Through The Night” EVERY NIGHT when we rest at home. This unit BURNS UP the road, sets up their own equipment, greets fans and MORE!

When all of the new songs were done, he played a song written by none other than Country songwriting Legend Mr. Bobby Keel. They played ‘Time Off For Bad Behavior” cut by Confederate Railroad in the 90s. It also was performed by many others as well. “Mama And Daddy” was next along with others like the Hoyt Axton classic “Della And The Dealer”.

From the latest album he played “Everything But You” and the title track “Tryin To Be A Blessing” . One of the songs that hits the truest to home for him is “Home Is Where The Highway Is”, which talks about the over 300 shows a year he does.

He finished with many Honky Tonk classics like the Wayne Mills song “The Last Honky Tonk” and the title track of his previous album “Mr. Honky Tonk”.  The song called “Outlaw Country” was from the classic 2009 album called Can’t Tame A Wildcat. Dallas Moore has a few old classic albums that ( like I said before) are rare finds for underground music collectors.

He closed the show off with Ol’ Slewfoot, and I’ll tell you what. He stayed until everyone had the opportunity to shake his hand and meet with him.  He always has and always does at every show, in every city across America, and I’m quite sure he will continue to do so for many many years.

This man deserves to be a road Legend and a Legend altogether, and his band that has been ardently traveling with him for so many years deserves just as much credit for what they do. I want to thank him for being so kind to my daughter, whom is now a new fan of his. Through that experience I leave my daughter, she will enjoy local music for many years to come..hopefully longer than I am alive.