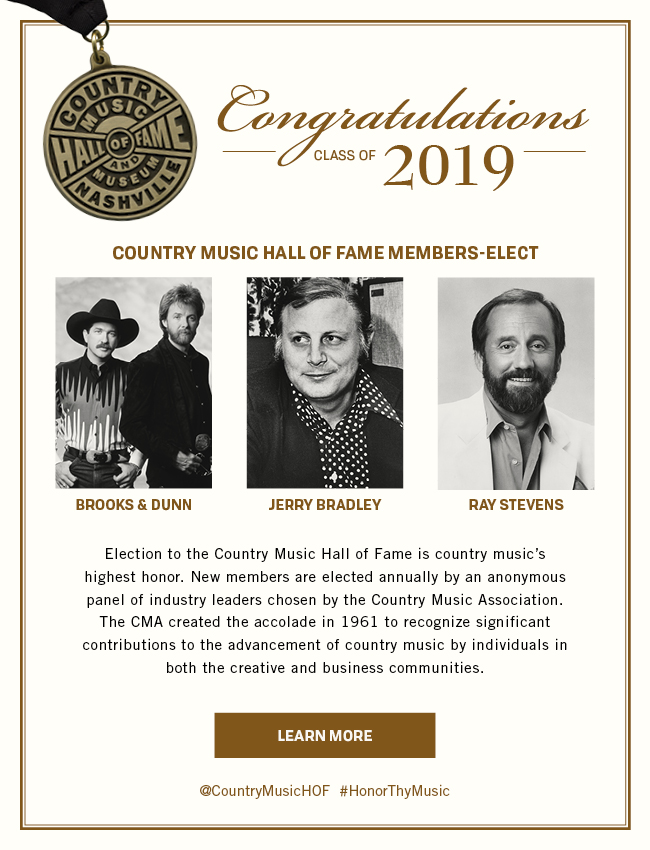 By now there is no doubt in my mind that most of you already know the three choices that were inducted into the Country Music Hall of Fame this past week on March 18th. I am quite adamant on the fact that every website in the internet world informed us of their choices, or streamed the live stream. I had a busy ass week, and I just simply didn’t have enough time to write an article informing you of the choices.

I will however, write an article shaming the Hall Of Fame on these choices and at the same time I can also applaud them for inducting Mr Ray Stevens. Let’s begin on that point. Under what ideology did the powers that be vote for Mr Ray Stevens over more well deserving candidates the likes of Mr Hank Williams Junior or Mr. David Allan Coe? Honestly if I sat and pontificated all of the possible inductees under this echelon of the scale I could name so many people more well deserving of this accolade than he in SOME areas. Yeah, I know everybody isn’t going to agree with me on this…

We ALL have our OWN ideologies on this subject here, every time they induct a few, you hear WHAT NO SO AND SO? I mean for God’s sake they can ONLY induct three or four yearly.  But are you going to convince me the Wilburn Brothers do not deserve to be inducted?

Well, let’s delve into Mr. Ray Stevens and allow me to present my point of applauding his nomination. Maybe after YOU read this you’ll agree, hell maybe it’ll turn you AGAINST the decision. But one thing is for certain, this ain’t a dictator website like another claims to be. It’s NOT MY WAY OR THE HIGHWAY, and this isn’t a discussion where I’ll CRUSH YOU if you disagree. Hell ,call me on the phone and let’s have a friendly debate about this, I LOVE TO HEAR FROM YOU ALL…get out some coffee and let’s jam.

Mr. Ray Stevens contributed a LOT to Country Music as a whole, it’s not just the comedy songs you immediately dwell upon while mentioning his name. I mean, the Mississippi Squirrel Revival WAS a classic and funny song but if you didn’t know some of the things Mr. Ray Price has done for SO MANY, let’s take a look.

In 1966, after releasing some of his comedy songs like “Ahab The Arab” and more, he recorded the FIRST version of “Sunday Morning Coming Down” that was penned by Mr. Kris Kristofferson. That single hit the charts from Stevens as well as Cash’s version too, he hit more success with “Isn’t It Lonely Together” which Mr. O.C. Smith recorded. That single landed on the charts as well. BUT HERE is where we enter the point in his life that I deem him WELL deserving of this accolade here.

Between 1961 and 1970 he helped MANY younger stars BECOME STARS, as an A&R man, producer and arranger. I’ll be honest in saying I place him upon my high regard as the likes of Mr. Ken Nelson and others. “My True Confession” was co wrote by Stevens and Miss Margie Singleton, whom I also consider a HUGE Country Music Legend in her own right. VERY overlooked woman that many have no idea how immensely Miss Margie Singleton has embellished Country Music. He did so much work for Miss Dolly Parton, Dusty Springfield, and Patti Page.

Now here is where I do think the 1980’s out shadowed Mr. Ray Stevens as folks like Hank Williams Junior teamed up with powerhouse Jimmy Bowen to produce and release some of Outlaw Country’s finest works, and with the help of some “other” influences he broke barriers by releasing TWO albums a year in his prime. In the span of 13 years he released 21 albums….21. 18 of those were certified gold, and he gathered 8 number 1 singles, and 44 top ten singles….so tell me, has he burned so many bridges that the Hall Of Fame will NEVER induct him? Will we ever know?

You can argue this or agree but there is no doubt that some of the finest songwriting on albums from the 1970’s and 80’s came from Mr. David Allan Coe. Many people hold a grudge against him for releasing his adult albums in the early 80’s, however if you begin on his 80’s music and you cannot find him a suitable candidate for membership, I would digress. “The Ride” and “Mona Lisa Lost her Smile” were some true Country Music classics along with the great song “She Used To love Me A Lot”.

I want to move on to my area of disgust on the topic, the Modern Era choice. Obviously they WAY missed the mark on this one omitting (once again) Dwight Yoakam, as he practically revived Honky Tonk Country in the 1980’s. He brought back that Bakersfield style and juxtaposed it with real Honky Tonk Country, and took it to ever local club across America.

I thought that Brooks And Dunn did have a few good songs in their prime, but they could have given this position to MANY other people the likes of John Anderson or Vern Gosdin, who had just as many charted hits as they did. So you may ask, just how many singles have they released? Well, first off Brooks And Dunn DIDN’T EVEN EXIST until 1991, so I suppose they could be nominated as a Modern Era choice, but HOW can they when people like Mr .Dwight Yoakam or Mr. John Anderson were in their PRIME 7 years PRIOR to their debut?

The duo released 50 singles and 20 of them went went number 1. They had 19 more reach the Top 10, whereas Mr. Dwight has sold millions of overall albums, including FIVE number one ALBUMS on those same charts. A LOT of people will additionally imply that Mr. Keith Whitley is also deserving of this nomination, and I always say that had he lived, he would have surpassed many of these statistics within the realm of sales and achievements.

I truly think the Country Music Hall Of Fame’s panel of voters missed the boat here on this, but I honestly can rest on Ray Stevens. I can and will honor and congratulate his being in this hallowed institution, because I truly think he DOES deserve to be within it’s walls..I just think others deserve the honor first. In closing, like I previously stated these are JUST MY opinions and thoughts, and I’m sure they don’t mean much to many people. I just wanted to put my thoughts out there for anybody that DOES want to read them.