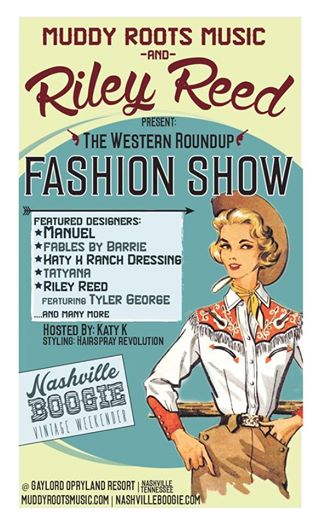 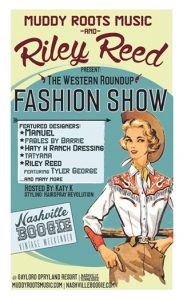 Well folks I am here preparing my coverage for The Nashville Boogie Vintage Weekender brought to you by Muddy Roots Music the first week of May at Opryland. It will be hosted by several people like Miss Riley Reed who spent some time interning under world famous designer Manuel. She is a bright and happy gal and she’s the nicest you’ll ever meet. Recently we all gathered at the Nashville Palace for her birthday and a grand time was had by all.

It is going to be about an hour long and will feature different designers of men’s and women’s western fashion and some Rockabilly fashion as well. This show will feature new styles for 2015, and I know I shall be learning new things because honestly I’m a jeans and t shirt guy. So I look forward to learning a new experience for me.

Miss Katy Kaye has been designing and modeling clothes for over 18 years and will have a feature during this show, as well as Jess Snell who now works under the Nudie label as their new Head Designer. We all know that Nudie was in fact a prominent part of Country Music in the 40’s thru the 70’s and in fact made the sparkly suits that many performers wore like Little Jimmy Dickens and Ray Price. Nudie Cohn who died in 1984 was personally responsible for
customizing automobiles and clothes. In the late 1940’s he tailored the most prominent suit that Hank Williams wore with the musical notes down the sleeves and he is also responsible for the famous suit Gram Parsons wore with the pills and pot leafs on the suit. Porter Wagoner boasted owning over 200 suits that ranged from 10-25,000.

Playing the music during this event will be someone I look forward to meeting JP Cyr and his Radio Wranglers. Also there will be a person from Denmark named Maria Koster that will also be showcasing clothing. I’ll be covering this event separate from the music festival which I plan to present in four parts. My thanks goes out to Miss Riley for chatting with me on the phone to help me report to you on this event.