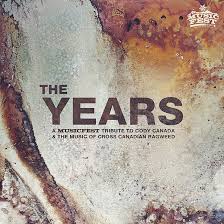 I’m excited about some of the releases of 2021 already…MY GOD the winter will be packed full of good ones coming out of many different genres. Delving into one of my favorite music communities, Red Dirt I found out about a recording from my friends over at Steamboat MusicFest.

See before the pandemic happened, THERE WERE a few festivals that DID transpire, including Mile 0 Fest…and THIS ONE. The MusicFest at Steamboat Springs is one of the hot spots for Red Dirt music across multiple stages in a huge area.

Now, I’m going to openly admit that as much as I admire this festival, I have not had the opportunity to cover this festival yet in person. It IS on our radar and we ARE making plans to go there soon! You know we are indeed a nationwide operation, and we have had a strong presence in the west.

This past January, the artists and staff at MusicFest banded together to host a BIG tribute show to Red Dirt Legend Mr. Cody Canada who was a major part of the band Cross Canadian Ragweed. Dickson Productions put together a damn fine show here, and his peers were given the opportunity to perform the songs of Cross Canadian Ragweed and the music that inspired many of them to become bands.

I wanted to take the opportunity to also write my love of this man and this band, and how integral they are to Red Dirt and underground music in general. I started out REALLY delving into Texas Music and Red Dirt stuff around 2007, when I got a divorce. After I healed, I started collecting records and researching bands like Cross Canadian Ragweed. I found them on their “Mission California” album but their live albums like Cain’s Ballroom truly gripped me.

I have been collecting all of the LIVE at Billy Bob’s albums on CD and their recording of “Boys From Oklahoma” was an epic milestone of my healing process from a dark period of my life. “Soul Gravy” is an iconic album in my opinion, and brought Red Dirt Music to a whole new echelon.

Their 2002 self titled album ( It’s called the purple album ) is one that propelled this band up to a national level from a local one, with classic songs like “Constantly”.  In may of 2010, the band officially announced it’s final show, saying “We’re Ragweed as the four of us, or not Ragweed at all”. Their final show was in Illinois that year, and Mr. Cody Canada formed the Departed.