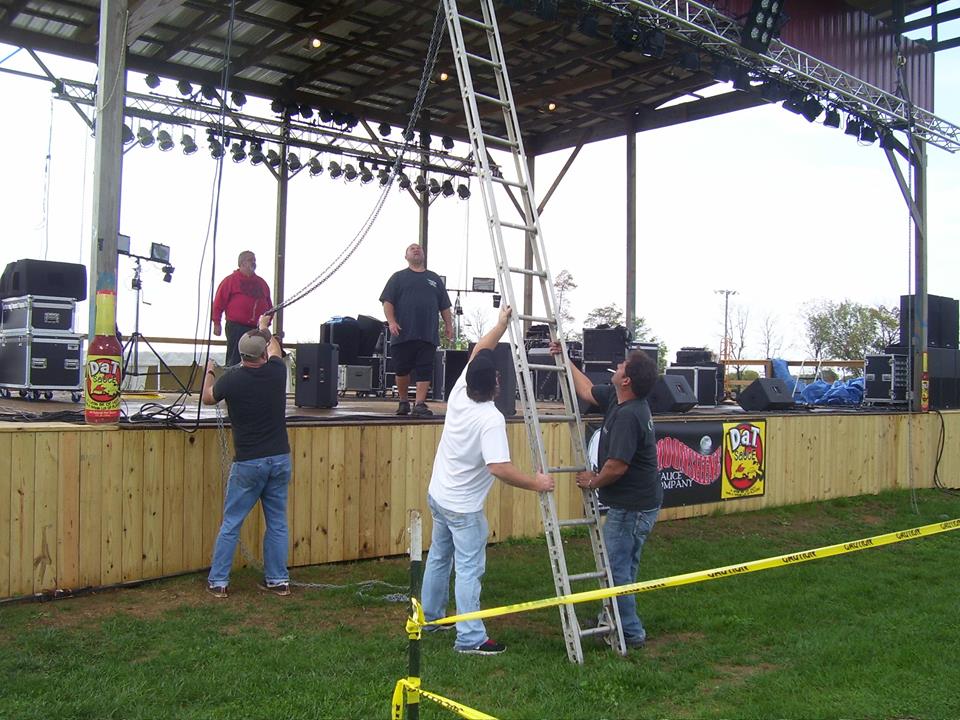 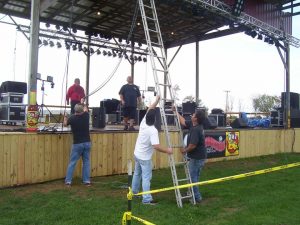 I’m finally here at Outlaw Fest folks…it’s been a long hard road of planning
and all nighters. Tonight was one, I been up many hours working.
And when I got here I was told ANYTHING I needed I could have..
I mean they are going out of their way to accommodate me to write
these articles for you.
I AM IN MY HAPPY PLACE! I got Mr. Kurt Fortmeyer next to me right now
and I am watching Mr. Hal Bruni performing some side music called
Painpills while we wait
for 2Country4Nashville to begin out festival at 6PM.

So right now I’ll go visit and do some shopping. I got to talk to some
new friends and see some old ones.
Hopefully there will not be anymore rain and tonight I can figure out what
to do about sleeping here or sleeping at home.
NOW I just talked to the Urban Pioneers and Mr. Jared said they WILL PLAY
some NEW songs tonight they just played Miss Tammy Pope’s birthday at
Live True Vintage.

This festival feels safe and the campground is absolutely GORGEOUS!
And the facilities are nice. I’m here nerding on all the stories and
history. I will leave a happy man this weekend.

Big G Gordon Ames is introducing the National Anthem and we
had a touching Star Spangled Banner.
Mr. Gordon Ames is our emcee for tonight as we have a special night.
They played a joke on us by playing the fake Wagon Wheel.

The first band was my great 2Country4Nashville and they started the whole
festival. I want to say Mr. Ronnie Reels and Reelsound is doing a KILLER
JOB already running the sound as they do for so many festivals.

They started with Honkey Tonk Heros which Billy Joe Shaver wrote.
Waylon recorded a whole entire album of Billy’s songs and also
named the album after the song.
Folsom Prison Blues and Only Daddy That’ll Walk The Line are two
good songs they did next.

They covered Crazy and White Lightning and I always enjoy
their version of Jackson and Joelene.
They played their original song 2Country4Nashville and a song
Bobby Mackey plays called What They Call Country.
They earned the name 2Country4Nashville. And Mr. Jo-El really
tears up the lead guitars.

Two more original songs were Last Cowboy In Wyoming and
Wine Leading The Blind.
They closed their set with Whos Gonna Fill Their Shoes…Who indeed?

Next up for the evening was Liz Sloan And Jared McGovern The Urban
Pioneers.
Like I said earlier They will play some new songs tonight and I’ll
try to report on them. Mr. Jared said that after the first of the year
they will record a second album.

THEY ARE TEARING UP THE STAGE!

They opened their set with Wayne Hancock’s 57 southbound and I was back in time
to hear ‘Aint Gonna Work”
And they played one of my favorites not on the album ‘Cindy”.

They played a new one called “Tennessee Moon” and they played
“Autumn Time”…which was proper. and it’s an upbeat song that got us
all dancing. You know this festival turned A LOT of people on to
The Urban Pioneers and I was spreading their gospel too I TOLD YOU
Liz Sloan And Mr Jared  are  fast as lightning!
HELL NOW she fiddles under her leg!

Their other new song was “Walk This Earth” and they played “Liz’s Reel”
And closed with “Breaking Down”.
Now I was running back and forth tearing down my tent for tomorrow and
I’ll try to set up a little closer to the stage for a signal where I
can work in my tent..I know I can solve this easily.

OK So part 2 will be my ONE YEAR ANNIVERSARY article about Joshua Morningstar.
I’m very sorry that I couldn’t cover the steeldrivers, but I got wore out and
the storms were looming again…