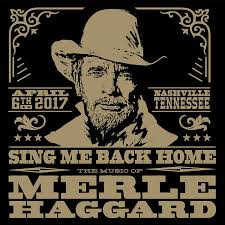 Sing Me Back Home: The Music Of Merle Haggard honored Merle and his music on what would have been the icon’s 80th birthday. Just as I was elaborating on how many good concerts and old albums are being reissued on vinyl, comes another good one!

Miss Loretta Lyyn has reissues as does others like Mr. Willie Nelson with American Outlaw and more importantly Mr. John Prine. All of these Legends have albums being re issued in 2020 and 2021, which makes me even more glad I began collecting vinyl.

This concert covered hit songs from an extensive four decade career, beginning from his first hits in the 60’s that Miss Liz Anderson ( mother of Miss Lynn Anderson ) wrote for him. She wrote “I’m A Lonesome Fugitive” for him, however she was unaware of his previous prison stretch.

Mr. Merle was never extremely vocal about his prison life, unless it was in a song. In fact, he and Cash both became the brightest beacons of light that ever reached out to any prisoner in history. Mr. Merle proved to the prison community that it was possible to turn your life around, and become a member of society.

Once released from San Quentin prison, he amassed 38 number one hits on the Country charts. He received numerous awards within the CMA and ACM realms, and was inducted into the Hall Of Fame in 1994.

In 1977, he was inducted into the Nashville Songwriter’s Hall Of Fame. He was awarded Kennedy Center Honors, and 4 different Grammy awards. So this show is not one to be missed by any Country Music fan here!