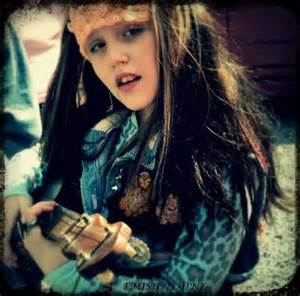 Ok Folks since I never have featured Emi Sunshine before I chose THIS as a GREAT
opportunity to kill two birds with one stone.
Folks this is one of the first times I have heard of a bar doing this in my area
and it REALLY grabbed my attention.
The Spillway Bar And Grill is actually one of my more favorite venues
to do this job in my area.
Anything I need he gets me and the Wifi is real good and THE FOOD is remarkable!
These guys are “Home Of The Moonshine Wings” made by the Moonshine Sauce Company
out of Murfreesboro Tn.
And the pizzas are AWESOME..It’s a real good place to catch a show.

On September 20th at 5PM The Spillway welcomes Emi Sunshine and Terra Bella.
Well whats so special about this? Folk’s EMI’s TEN YEARS OLD!
SHE IS becoming an internet sensation AND a BIG DRAW at live shows all over the country.
Don’t worry I’ll tell you more about her in this article BUT FIRST you ask me…..
HOW will they pull off allowing minors in? WELL I spoke to the owner Mr. Robert the other night
and he told me this:
They are putting a flatbed trailer on the smoking patio and roping off the bar entrance.
Minors will have NO ACCESS to the bar facilities.

How can I buy tickets? I got that covered too FOR 5 BUCKS you can pay at the door.
FROM THE WEBSITE:
10yr old Phenomenon EmiSunshine will start out the night 7 to 9 with her sweet sound
of Gospel and Americana music. She has been said to be the next June Carter and is
doing very good at living up to this expectation. Then Terra Bella will finish up
the night with their soulful sounds and beautiful Harmonies. $5 cover for all this
awesome music is something you don’t want to miss!! ATTENTION!! We are very excited
to announce that the EmiSunshine show September 20th will be outside and ALL AGES.
Minors will only be allowed in the concrete area and it will be roped off from the
deck where alcohol will be and as you can see there is no seating so bring your chairs.
They will enter on backside of building and never enter through the bar. It will be a $5 cover.
We are really stoked to give kids the opportunity to see Emi perform. Then at 10 o’clock
inside Terra Bella will finish the night out!!

I met Emi Sunshine and first heard of her at R.O.P.E. this past year. I remember it VERY
well. I was sitting at a table with Keith Bilbrey and Margie Bowes and Ron Elliott’s wife
when Emi was escorted to the stage by her mom. She’s just a little gal, and she’s got
a true southern drawl let me tell you.
She’s from Madisonville Tennessee which is a East Tennessee region of the mountains.

This youngi’n is NO TAYLOR SWIFT…oh no no….she’s “Olde Time Music Turned Upside Down”.
I’m going to reprint her BIO from Facebook:

With a family musical lineage that goes back three generations it’s no surprise that
EmiSunshine is a natural performer. Like her great-grandmother, Wanda, Emi has the ability
to turn on the country charm and entertain a crowd. Like her grandmother, the late Patsy Hamilton,
Emi can sing the Lord’s gospel with the conviction of a soul who’s been on the earth years
beyond her age. And like her daddy, Randall Hamilton, Emi can cut loose and have fun with the crowd
while she entertains them.

Before Emi could actually talk she was cooing along to harmonies with her grandmothers.
By the time she was 5 she’d written her first song. By the age of 6 she’d already performed
live at countless churches and festivals around east Tennessee and at age 7 she recorded her
first 2 albums, simultaneously, Strong As The Tall Pine and Wide River To Cross in her family
studio with the help of her daddy and grandpa Bill.

Drawing inspiration from artists such as Buddy & Julie Miller, Dolly Parton and Sister
Thorpe as well as regional artists like Jeff Barbra & Sarah Pirkle, Kata Hay, Matt Woods,
and her distant cousin Kevin Abernathy. Emi strives to write and perform her own songs
while also covering some of her favorite artists.

Emi is also a talented musician who currently plays ukulele, banjolele, and mandolin
while continuing to strengthen her vocal range. Her band consists of her daddy on bass guitar,
her uncle Bobby on drums and percussion, and her older brother John on mandolin,plus an ever-changing
cast of fellow friends and musicians. Randall graduated from MTSU with a degree in recording
engineering and currently does sound for several east Tennessee venues as well as owns and operates
Hamilton Sound & Recording. Bobby has played drums professionally for over 15 years traveling
with several different bands. He organized and founded a music ministry in Charlotte, NC for
several years. As a senior in high school John won a Grammy as a member of the Hiwassee
Dam Steel Pan Band. He’s a multi-instrumentalist and a true artist himself, who relishes the
role of big brother.

This young lady grabbed my attention on television when she was NAILING
Jimmie Rodgers “Blue Yodel #6”..
This gal sings songs most adults can’t even tell you aren’t her own songs and
that tells me something about today’s “society”….sad.
Will she ever make it “Big Time”???? Folks this young lady has already DONE IT!
She’s been on the Opry..and THAT IS more than enough for me. She’s the REAL DEAL people
and we need to support her and bring the young people BACK TO REAL COUNTRY MUSIC!