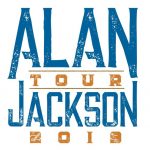 The Country Music Association created the Country Music Hall Of Fame in 1961 to honor artists who have significantly impacted country music. Currently there are 130 members on the Hall of Fame roster, including icons such as Johnny Cash, Garth Brooks, George Jones, Dolly Parton and Reba McEntire. The official induction ceremony for the new members took place today April 5th 2017 .

Formal induction ceremonies for Reed, Jackson, and Schlitz will take place at the Country Music Hall of Fame® and Museum in the CMA Theater later this year. Since 2007, the Museum’s Medallion Ceremony, an annual reunion of the Hall of Fame membership, has served as the official rite of induction for new members.

Alan Jackson is one that achieved my TOP album of 2015 READ THAT HERE with his latest album Angels And Alcohol. He is one of the few mainstream acts that I relentlessly cover on this website due to his elegant stage presence and his tireless pursuit of Traditional Country Music, his respect for the Legends of it, and his overall style of his music. The ordeal he endured during the awards show where he stood up for the injustice of the late George Jones showed his brazen love for the honor and dignity of it all, and the duet with another Legend George Strait the Larry Cordle penned “Murder On Music Row” equally proved his worthiness of this honor. Alan Jackson will be inducted into the Modern Era Artist.

Of his 16 studio albums he has amassed 66 Billboard titles and 35 number one hits. He has sold over 80 Million records worldwide total. I firmly believe he has pretty much been awarded every possible accomplishment Country Music can bestow upon an artist, and has worked hard to deserve this honor.

Jerry Reed, what can I say..I been waiting to hear this name for many many years now. Rumors swirled the industry all month of possible inductees and he was one of the staple possibilities. Many years of embellishing what I call “The Country Music Movies” of the 70’s and 80’s bringing us such comical characters as Cledus Snowman Snow  on the iconic movies “Smokey And The Bandit”.

Out of his 49 studio albums 4 of his 59 single garnished number one hits however his signature songs like “Amos Moses” are timeless classic Country Music songs and are never overlooked by people like me. He is a two time CMA Award winner for instrumentalist of the year and a three time Grammy Award winner.

Jerry Reed was one of Country Music most celebrated guitarists and talented musicians, and are often coined as perhaps the fastest guitarist ever next to Larry Collins and Chet Atkins. All three had a humble respect for one another in their own right.  Jerry Reed will be inducted into the Veterans Era Artist.

Don Schlitz is a hit songwriter known mostly for writing the Kenny Rogers hit “The Gambler” in 1978.  Among others like “Forever And Ever Amen”, and “When You Say Nothing At All”.  He has over 60 major cut songs but national artists and has amassed 3 CMA awards,2 grammys and 1 acm award for his work.

Mr. Don is a member of the North Carolina Music Hall Of Fame and regularly plays songwriter nights all over Nashville, and is regarded to be a hero among songwriters.

Shortly after one of the best contributors to the show Gordie Trapp died the Hee Haw fans were dealt yet another blow to their leftover treasure, as the show’s co producer Sam Lovullo died this past week in his California home from heart disease. In 1969 he and the two other writers noticed a rise in ratings during the Johnathan Winters show when it featured Country Music stars. The initial show was created by Frank Peppiatt and John Aylesworth who teamed up with Mr. Sam to produce and write the sketches and jokes while also listening to input from Archie Campbell and Gordie Trapp. Later on Mr. Archie and Mr. Gordie went on to have more creative input and were allowed to evolve some of their classic characters they made famous.

Mr. Sam went on to not only introduce the concept of the down home humor and skits that adorned our screens and our youth, but he also wrote the jokes and created many of the characters we know now. He produced the entire run of the show for all the 20 plus years save for the last five years of syndication.

As we all know the music portions of the  show were recorded before live audiences at Opryland and many of the frequent guests like Loretta Lynn and Cash would often be furnished overalls to dress in. However the joke and skit segments were filmed in bulk fashion to play through the week to save on production costs.  The show was one of the places that brought mainstream people the likes of Keith Whitley as he transcended from Bluegrass to Country, as well as bringing Ricky Van Shelton, Conway Twitty, Alan Jackson and many others. However one day the cornfield was set up, one day newscaster Don Harron (Charlie Farquharson) would record his news broadcasts, The judge Archie Campbell and also doctor skits were all pre recorded and a laugh track was edited in at a later time.

The shows hosts Buck Owens and Roy Clark were already at the pinnacles of their career when they were chosen to host the show and accepted the spots. The Buckaroos often appeared on the show even past the 1974 death of Buck’s right hand man Don Rich at 34 in a motorcycle accident that left Buck Owens emotionally and professionally drained as a viable act of his time. Capitol Records producer Ken Nelson who masterminded many of Buck Owens albums self admittedly lamented of Don’s passing as the the end of Buck Owens And The Buckaroos. Toward the end of the show’s twenty year run Buck Owens left the show and it resulted in a rotating musical guest to accompany Roy Clark, and in the final season Roy Clark hosted the show solo.

Despite the show’s commercial success it sparked heated political debates within the CBS corporate offices as Michael Dann who hated the show personally but supported it professionally locked horns with Fred Silverman who believed it could not generate more ratings. In 1971 CBS dropped the variety show and forced it to continue on another network for a record twenty plus years. It in fact remains the longest prime time comedy show of it’s kind in history.

Sam Lovullo had retired from producing for the final five years of the show’s run having lived through many of the deaths of the show’s main cast members and having to say farewell to many of the Country Music Legends that graced the Hee Haw stage with iconic performances the likes of Charley Pride and Clint Black. Having many of the former cast members passed away Mr. Sam saw the forthcoming change of the business and music and announced his retirement from television although he did occasional work including assisting in producing a fund raiser at the Opry for Johnny Russell.

Services will be held at 11 a.m. on Saturday at St. Cyril’s of Jerusalem in Encino. Donations in Lovullo’s honor can be made to St. Jude Medical Foundation.