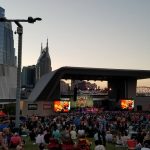 One of my all time favorite festivals to write about that happens in the spring happens in Cumberland Maryland, and it’s called none other than Delfest. You know I LOVE ME some Del McCoury and I highly encourage you to attend the 10th annual Delfest on May 25-28th at the Allegany County Fairgrounds in Cumberland, MD.

The Del McCoury Band plays many of the festivals I cover throughout the year and it’s always nice to run into them on my website adventures. This is his own festival and never falls short of festival fun and you can purchase your tickets and passes HERE.

This is a multiple stage outdoor festival event, that is conveniently located by airports and many hotels.  The fairgrounds have permanent restrooms and showers, and we supplement the facilities with ample portable toilets. Please be courteous and take only the space you need. Roping off areas and saving space for latecomers is not acceptable festival etiquette. Camping overnight on Sunday is permitted. All patrons must leave the fairgrounds by noon on Monday. There WILL BE a family type camping area that is quieter at night, and camping IS INCLUDED in your ticket price, however you may not be camped near your vehicle due to attendance. You also have to purchase a separate parking pass to park your vehicle on the adjoining property. As always because I am a patron that requires hotels at my festivals that my website covers here are some that I found on their website and my own research.

Be in the DelFest Family Album!

DelFest really is like a family reunion each year—and not just for the McCourys! Your smiling faces are a real part of the fabric of DelFest and we love to see your own special DelFest moments and memories. On that note, today, March 29th we want to turn Facebook, Twitter and Instagram into a virtual 10th Annual DelFest Family Photo Album of memories! Find your favorite DelFest memories/photos and upload them now with the #delfestfamilyreunion hashtag and tell people what you love about DelFest! Then everyone can search for and enjoy each other’s photos…and we’ll reshare some on our pages as well!