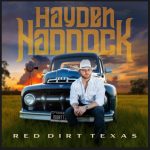 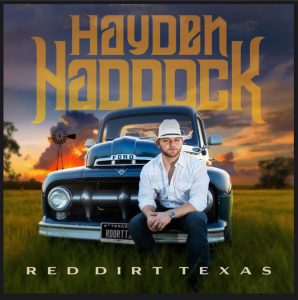 I first came across Hayden Haddock when I heard his track “Honky Tonk On” as a pre-release single for this record.  As a first impression, it was a really good track. It reminded me of a cross between Aaron Watson and Randall King.  Hayden Haddock certainly represents the red dirt sound perfectly. This is actually his second album that I can find. His first release was First Rodeo which was a seven song effort from 2018.  Red Dirt Texas is the name of his new release and it’s a better effort in every way. There is better production across all ten tracks here and a more confident sound. Let’s dig into a few of my favorite tracks.

The album kicks off with the title track, “Red Dirt Texas”.  It’s a great ode to Texas red dirt country and it’s a fun way to kick off the album that lets you know what you’re in for over the next thirty minutes.  “Still Dancin’” is a great country love song and Hayden Haddock gets to showcase his smooth vocals on this track that would fit in nicely on any Aaron Watson record.  “Honky Tonk On” is a good Texas honky tonk track. You can’t really go wrong with this one and it’s a perfect introduction to Haddock’s sound. Finally, “Take You Home” is a song about taking the right one home to mamma, but in a rocking country number.  I dig the guitar work on this track and I’m sure it’s a live favorite.

Red Dirt Texas makes a great first impression to the music of Hayden Haddock.  If you’ve never heard his music, I highly recommend giving it a spin. If you’re out in Texas, Hayden Haddock is playing live all over that state so there are plenty of chances to check him out live there.  If you’re not in Texas, check out this new release and let us know what you think on social media. Red Dirt Texas is out everywhere as of Friday January 31st, 2020.