It feels like I’ve been hearing about the name Morgan Wade for a couple of years now.  Whether she was opening for someone or had a buzzworthy YouTube video or a couple of singles on Spotify, Morgan Wade was always someone who was part of the conversation as an upcoming country artist to watch out for.  Well, that time is now.  She is about to release her debut album Reckless and I’m here to tell you, this is a good one.  This record is produced by Sadler Vaden and if you don’t know him, he’s the guitar player for Jason Isbell and The 400 Unit and a critically acclaimed solo artist in his own right.  That being said, this is a great guitar record.  You can’t always say that for a country album, but this one is.  Morgan Wade has a voice that would fit in with alt country or alt rock.  Her voice goes from smooth to a raspy growl that works well on a guitar record such as this.

The album kicks off with “Wilder Days” which is a fun song about wishing you had known a lover back when they were wilder.  It’s a good track to kick off the album as it straddles the line between country and rock like a lot of the record does. “Other Side” is another great track that reminds me of a mellow 90’s alt rock song like something Matchbox 20 would release.  It’s a song about seeing a relationship through the good and bad and coming out on the other side. I dig this vibe and it’s nice to hear songs like this on a good country record.  Another favorite is “Last Cigarette” which to my ears is a song that could play on mainstream radio as a crossover hit.  It’s a strong track both lyrically and the catchy instrumental takes it to another level.  It’s a track that compares the high of having a last night with a soon to be ex lover with the high of a smoker’s last cigarette before they quit.  The track “Met You” is a strong country ballad that acts as the album’s finale.  It’s about finding someone special at a low point in your life and I feel like it’s one of the best vocal performances in the album.

If you’re like me and have been hearing the name Morgan Wade over the past few years and have been hoping for a full album, this debut doesn’t disappoint.  It’s a country record that brings a strong rock vibe across it’s ten tracks.  Producer Sadler Vaden had done an amazing job capturing how Morgan Wade is a singer who can meet the tender moments of country music, but still rise to the occasion with some souring alt rock vocals. There isn’t a bad song on this record and I highly recommend giving it a listen.  Reckless is out everywhere as of March 19th, 2021 and I can’t wait for everyone to hear this one.

Buy the Album and Merch : https://morganwade.presspressmerch.com/ 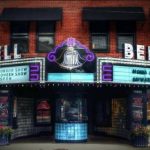 On January 11th, 2020 I made the trip down to Pineville Kentucky in torrential downpour rain. The Bell Theater was hosting an all-female bill. Ronee Napier, Morgan Wade, and Kelsey Waldon all brought their talents to the Bells stage. I had been looking forward to this show since it had been announced. It definitely measured up to my expectations. The Bell theater is one of my favorite venues to experience live music in. For many reasons outlined in a previous piece.

I arrived at the Bells door quite a bit early. I generally arrive early for every show at every venue I attend. It was chilly and still raining as a small group of individuals congregated near the venue doors. It was not long before management pulled us in out of the weather before the official Time for doors. It is not hard to see why I love the Bell Theater. We make our way in and find a spot to take in the show.

Ronee Napier was on the bill as an opening support artist. I had never heard of her before seeing it on the show posters that night. The MC introduced her as a friend of his wife and local talent. The Bell Theater had invited her to open the show. This also happened to be her very first time stepping on a venue stage to play and sing songs for people. She brought some accompaniments along in the form of her fiddle playing uncle Elias Collett.

I could see she was a bit nervous as she was handed over the stage following her introduction. You could hear it in her voice as she introduced her uncle Elias. Those nerves faded away after the first verse of her cover of The Way I am. By her 3rd song, the Dixie Chicks song Travelin’ Soldier Ronee had taken command of the stage as she captured the undivided attention from all in attendance. Following this cover with 3 more covers (setlist listed below).

Ronee and Elias then truly showed they had plenty of guts and even more, heart when they lead into a cover of You’ll Never Leave Harlan Alive. This could have gone south for the duo quickly. A bold and risky move in this area. The pair undeniably owned this song. They received a standing ovation. You could see the delight in Ronee’s expression as she soaked in the thunderous applause. She thanked the crowd before she shared the story of how her sister asked her how she was going to play this show without an original song in her catalog.

Ronee stated that she informed her sister that “I ain’t no songwriter.” with encouragement and idea swapping from her sister. The siblings proceeded to write an original. 24 hours before her stage debut. She began strumming her guitar to the tune of her original work Burnin’ Like Bourbon. For a song less than 24 hours old. Written by two people who had never claimed to be songwriters. Their original song stood up. Was it perfection? No, was it exactly what it needed to be in that exact moment? Possibly. I believe it to be the song that proved to Ronee maybe she is a songwriter after all.

Did we just witness a local woman fulfill a lifelong dream of playing a few songs on stage opening a show for Due paying musicians? Alternatively, did we just witness a spark ignited in a woman who decides to write some original songs and begin the attempt to forge a career singing the songs she loves as well as the songs that fabricate the story of her life? Only Ronee can answer those questions.

Next up would be Morgan Wade. What can I say about Morgan and her songwriting? her ability to put her songs in your soul, to make you feel the place her songs were written from. The passion in her lyrics can not be faked. These songs are genuine and directly from her heart and soul. watching her perform her songs on stage it is obvious they are coming from a real place, a real experience, a real person. These are not fictional tales spun by a made-up persona that only emerges when she shoulders her guitar and steps up to a microphone in a stage’s spotlight.

These are not just songs she sings for our enjoyment to pay a utility bill. It is as important for her to be singing these songs to her fans as it is for her fans to hear them. Morgan is a special talent that does not come along very often. Morgans music has no ceiling in my honest opinion. The only limit to her success is up to her. I believe she can take her career to any level she desires.

I was pleasantly surprised to discover that Morgan’s set was to be with her full band, The Stepbrothers. The five-piece band steps out on the Bell Theater stage to play their first show of 2020. The vibe was full of excitement, electric and upbeat. It was apparent that Morgan was the draw on this night. Morgan touched on the social media subject of the day. The “you are so much prettier when you smile” ramblings.

She also shared with the crowd that a lengthy phone conversation with her family back home centered around her not smiling sufficiently. Was responsible for the lack of an official set list being worked up. She would turn to the band members with the next song to be played. This did not have any effect on the flow of their set.

No disrespect to Kelsey Waldon intended. The headlining artist, Kelsey Waldon released a solid album in 2019 on John Prine’s Oh Boy label. It landed itself in my top 10 albums of the year. It has been in many people’s “Top Albums of 2019 lists. Kelsey played a nearly perfect set. A solid performance. Showcasing her Excellent songwriting talents. Her vocals emerged as the stand out of the set. Her band is assembled with solid and talented musicians.

My only complaint with the headliners set was The bands’ stage presence. Essentially, a good stage presence pulls the audience into the performance. This did not happen to me. There was not a bit of excitement from the band. They seemed “robotic”. However, I will always give credit where credit is due. Musicians can be
talented and skilled at their craft without exceptional stage presence. Kelsey’s band members are all talented, skilled and disciplined musicians. Unfortunately, stage presence will always be the deciding factor between a decent performance and a great performance.

The night was loaded with talent and terrific music provided by all the artists. I did not leave Pineville disappointed. It is hard to leave eastern Kentucky in bad spirits. When It assembles that amount of talent. It provides an intimate location to showcase it, with friendly accommodating salt of the earth folks making up the staff. It is Impossible.

Thank you to Kentucky, Bell County, Pineville, and The Bell Theater.