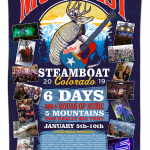 If it’s one thing I truly have been keeping my eyes on the Red Dirt world, and it’s west coast reach. Along with the Jamgrass community this is becoming a huge, massive community and quite the lucrative market even though it gets very little media attention. Let’s take a look at the lineup and other information I usually include into my festival series.

Amazingly for early on into 2019 there are tons of early festivals happening to satisfy to pickiest of festivals music lovers, for Red Dirt Music. With a lineup like THIS who wouldn’t want to go:

Micky And The Motorcars

Mike And The Moonpies

First week in January – Six days, 200+ hours of live music, a world-class ski resort – does it really get any better than the MusicFest? The MusicFest draws thousands of ski-lovin’, music-lovin’ folks to the snow swept peaks of Colorado each January.

The largest group ski trip of its kind in the nation, the MusicFest brings the finest Texas and Americana music to the world-class ski resort of Steamboat, Colorado for a week full of sport and song. The festival boasts a stunning roster that includes both legends and rising talents alike.

Dickson Productions has over 30 years of experience as the premier travel package provider. With Dickson Productions working on your behalf, you can hit the slopes and also get tons of music favorites at wholesale prices. All lodging accommodations for the MusicFest are located ski-in/ski-out or within minutes of the mountain base, and participants personally choose all the options.

Want to walk out the front door onto the slopes? A hot tub on the back porch? A slope side luxury suite or a penthouse? A MusicFest stage in your lodge or steps away? No problem – it’s all part of building your exclusive MusicFest package, the vacation of a lifetime. And there’s every level to choose from to satisfy your taste in lodging, music, price and the ultimate Rocky Mountain vacation.

After a day on the slopes, what really happens at the MusicFest?

The MusicFest has long been heralded for its jam-packed schedule of events and concerts. Over 200 hours of live performances take place during the MusicFest, an amazing opportunity to see as many great Texas and Americana artists as you can handle (and those are the “planned” performances).

Shows are held in a multitude of diverse venues including a stage resembling an old barn/hunting lodge, a huge dancehall/tent, an intimate pub, an old saloon, two luxurious ballrooms, and an upscale country club setting complete with plush seating, and a fire place (a “must” experience)!

No matter your style of music or setting to experience it, there’s a venue for everyone’s likes. Whether you’ve come to kick up your heels and party all night, or prefer to soak up the music in a lower key and comfortable seated setting (or anything in-between), MusicFest has you covered. Drift from one venue to the next, or just sit back and enjoy that ONE special venue that fits your style with like minded friends – that’s the beauty of MusicFest – a truly unique and exceptional sporting and musical experience with one thing in common; a grounded and REAL experience with a community that embraces its lifestyle and state of mind.

No matter your style of music and setting to experience it, there’s a venue for everyone’s likes. Whether you’ve come to kick up your heels and party all night, or prefer to soak up the music in a lower key and comfortable seated setting (or anything in-between), MusicFest has you covered. Drift from one venue to the next, or just sit back and enjoy that ONE special venue that fits your style with like-minded friends- That’s the beauty of MusicFest – A truly unique and exceptional sporting and musical experience with one thing in common; a grounded and REAL experience with a community that embraces its life style and state of mind.

The newest addition to the MusicFest family of stages, the Strings Pavilion is a state-of-the-art concert hall built for classical music, but The MusicFest ramps it up. Located at the “base of the base” of the mountain, this world-class stage is just steps away from…Read More

Turn the Page: Bear River Becomes The Timber & Torch The MusicFest hosts shows in many venues over the years, but the “Bear River” is where the magic began. A cozy bar nestled at the foot of Mt. Werner, the Bear River is a haven…Read More

One of the most iconic venues at the MusicFest, The Big MusicFest Tent is hard to miss. Known for being “the largest dance hall in the Rockies” this massive, climate-controlled tent hosts some of the most high-energy full band shows seen anywhere. With a state-of-the-art…Read More

Named for the original “Dung Beetle Saloon” at an old convenience store in Hallettsville, Texas, this MusicFest venue keeps the good times rollin’. Featuring over twelve hours a day of intimate, acoustic music, this popular venue is the definition of what MusicFest is all about…Read More

Not only a famous shopping experience, but a great meeting place where you may catch a special (unannounced) performance, autograph signing, or brand new, and never seen before merchandise! Conveniently located near the mountain base in the Grand Resort Hotel and next door to the…Read More

The MusicFest at Chief Theater

The Chief Theater may be a relatively new addition to the MusicFest, but this historic theater has been hosting live music in Steamboat for nearly 100 years. A vintage building with old fashioned, comfortable theater seating, this downtown venue is the perfect place for an…Read More

The MusicFest Media Lounge “ON AIR”

Get up-close and personal with your favorite artists in our all new Media Lounge open to the public. See artist interviews by a variety of media outlets including national and international radio hosts, television hosts, and social media personalities. With behind-the-scenes experiences like this, it…Read More

The Steamboat Base Club

The Steamboat Base Club is the official “MusicFest Country Club.” With a gorgeous, up-scale setting this venue is the perfect combination of class and comfort. Featuring acoustic performances nightly, old-fashioned cocktails, appetizers and great company, this intimate club is the perfect place to cozy up…Read More

Located at the heart of the mountain-base in the luxurious Steamboat Grand Ballroom, this venue has hosted many of MusicFest’s most popular shows. Home to the esteemed MusicFest Artists’ Tribute to a Legend each year, this venue has seen some of the rarest performances on…Read More

This lofty listening room is one of the festival’s signature venues. Only at MusicFest can you take a picturesque gondola ride up 3,000 feet for a high-altitude music experience like no other. These rare mountaintop concerts are a truly uplifting experience, both musically.

This music festival is so huge and there is so much to do I will have to put up more general links on here than I usually do to reduce the length of the article. So you can click HERE for a pretty conclusive listing of all the area hotels.