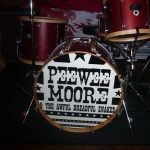 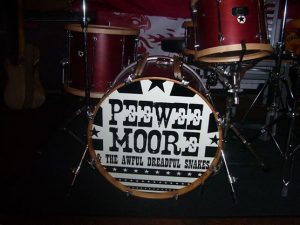 Folks I’m down here at The Slider House in Nashville again.This time I am about
to witness Pee Wee Moore And The Awful Dreadful Snakes.
He is a member of the Last Honky Tonk Music Series and is currently supporting his latest album
“Making Sure The Story’s Being Told”.

We are just waiting for sound check and I’m setting up shop in the corner
again. I did not order food after my previous mishap.
THE MUSIC is what is mainly first and foremost in my mind as I press on.
I can’t leave it closed without saying I like the garage door type smoking patio
where smokers can still enjoy the music..

They opened the show with “Six Days On The Road” by Dave Dudley. His leads
are already ripping the roof off this place.
This band doesn’t fool around they mean business! They are twisting and
Honky Tonkin Nashville a new asshole!

They are doing truck driving songs and ‘Lay You down” by Conway Twitty.
This BY FAR is ONE HELL of a show down here! WHO the hell wouldn’t want
to drink beer and listen to Pee Wee rip leads on Waylon songs?
And his slow songs are really good as he plays “If I Could Touch Her At All”
I believe Lee Clayton wrote it.

HE IS DEFINATLY “Making Sure The Stories Being Told” right now
as these guys aren’t falling off stages or singing about a Donkey
and broke into “A Boy Named Sue” and “Pancho And Lefty”.
His original song “Running Moonshine” is a real toe tapping song
you can dance to.

He just broke out into a huge Merle Haggard set and is now
playing Ramblin Fever. Folks I want to say this..Peewee plays
over 300 shows a year, he literally LIVES on the road.
And he is playing “Aint Got Nothing” from his first album
“The Leaving Side Of Gone”.

His second set began with “My Favorite Memory” which he sang
with his wife.
And “Ive Always Been Crazy” is a popular song down here and once
again his lead guitar is going strong on songs like Johnny Paycheck’s
“I’m The Only Hell My Momma Ever Raised” and many many more.

He is playing “Leaving Side Of Gone” off the album of that
same name as he closed his set, but he will return tomorrow
with a different set list.
His job is done and so is mine..time to drive back to Kentucky. 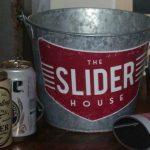 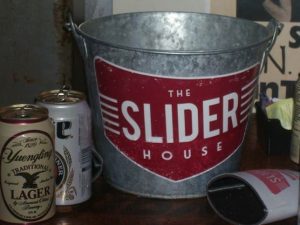 One of my “Nashville buddies” Mr. Jason H. Buchanan has introduced some REALLY GOOD
Friday and Saturday shows at The Slider House on Division Street on Music Row in Nashville.
And I’m REALLY excited about this series because…IT STARTS AT MIDNIGHT!
When I heard THAT I immediately knew I can work my second shift job and
STILL GO cover some of these shows.

And cover them I SHALL, first off I URGE YOU to come see the shows.
Some of…hell ALL OF the talent is REALLY good.
I THINK this will be a really great series and will be well received in
the area.
ALSO the shows will be FREE! HOW can you NOT go to a FREE SHOW at a great place
to eat in Nashville.

PLEASE JOIN ME Tomorrow night as I go watch Mr. Owen Mays and the
80 proof boys play.
I’ll be reporting from the show if there’s Wi Fi and I think there is.
I have SO MUCH to do this weekend and I’ll eventually catch up.