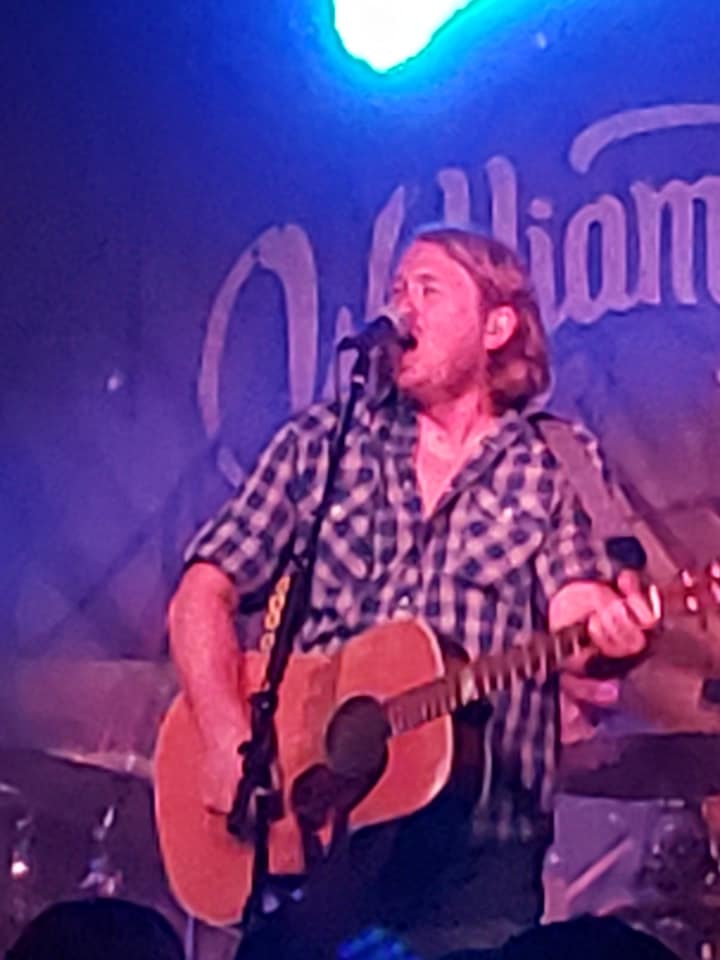 Right now I am currently holed up in my Atlanta hotel room, working on an arena job for Country Music Legend Mr. George Strait, and last night we had a side job at another show. Last weekend in Nashville I ventured down to The Basement East to visit with my Red Dirt friends as they welcomed the wonderfully talented Mr. William Clark Green. I haven’t had the opportunity to cover his music since two years ago at Tumbleweed.

He released his new album called “Hebert Island” last year, which ranked high on many year end lists by websites like mine, however tonight he only played a few songs from that album. Many of them were from the “Ringling Road” album, in fact it was almost played in it’s entirety. However, I didn’t mind that little fact of the show. This man and his band tours America quite often, and when they hit my area I usually have 4 or 5 opportunities to catch him, like Southgate House or Minglewood Hall in Memphis.

I like the Basement East for the sound quality of the entire venue overall, I don’t believe I ever had an unsatisfactory report on the sound or lighting there. There isn’t much of a food option here, as the only thing to eat was an overpriced ham sandwich with a cheese name I couldn’t pronounce. Eat before you go to this venue, or starve…take it from a diabetic…do not starve. One great thing I want to point out about this venue is the staff, they are absolutely amazing and friendly! ALL of them, even the door people.

William Clark Green is going to be part of several festivals in 2019 including Lone Star Jam, and Cotton Festival, and Larry Joe Taylor Festival. So he always has some exciting news for all of us involved in the Red Dirt Texas music scene. He opened his set with a song from the Ringling Road album called “Sticks And Stones”, which like I mentioned before he played a lot of songs from.

The “Rose Queen” album was also well represented tonight boasting quite a few selections like the next song called “Remedy”. One of my favorite songs that he does was called “Creek Don’t Rise” , his unique vocal style was showcased quite well here tonight with that song. The only one true complaint I had was that he really didn’t play any selections from his first two albums, called “Misunderstood’ and “Dangerous Man”. If I had to sit and analyze his entire catalog he slightly changed direction during the “Rose Queen” album, perhaps because Red Dirt was changing in 2010 in many ways.

I kind of think Texas music embraces it’s roots while it has evolved into it’s own identity as well, and that might be the reason for his slight change for the ‘Rose Queen” album. You either like the sound or you don’t, some of my readers say it’s just Texas pop country, and others really love the music they play. I myself enjoy it all to be honest.

Here are some new friends I met down here that now enjoy reading our website, I’m always meeting new friends and turning people on to great new music. Networking is a very important tool in my job here in the music business.

He played the title track to his new “Hebert Island” album, which is a uptempo rabble rousing song about a Cajun party on an island. Further on in his set tonight he played the song called “She Loves Horses” , which is a song that exemplifies my idea of holding true to the roots of Texas music in every way. This song is a good rodeo tune about a wild and free woman, that used to be in his life. This song could have easily graced the mainstream radio airwaves back in the 90’s, had it been around.

“Next Big Thing” was once again off ‘Ringling Road” and was the opening song from his LIVE Ringling Road album recorded at Gruene Hall. it’s kind of a joke song about the truth of the industry, and how poor traveling songwriters really can be. Everybody is telling them they are on the verge of super stardom, while in truth they cannot afford gas station roller dogs!  As he steamrolled right into his trademark song ‘Ringling Road” that makes the entire audience sing DA DA DA DA DA DA…..even I was involved in that!

He told us all a story about Mr. Randy Rogers Band before he played his slow song called “Still Think About You” , a truly sad song about lost love. He played a few songs I didn’t totally catch as I was jotting other things down, and paying attention to another issue, but his next song was 2013’s title cut called “Rose Queen”. This one is a great song about a country boy that hooked up with a gorgeous prom queen type gal from his hometown, that went off to college and returned pretending to not know him.

“Goner” was a good song off the new “Hebert Island” album, and he followed that up with another selection off the album called “Hit You Where it Hurts”. “This is Us” was also a selection from the new album, that reflects upon lovers fighting and being in love as well. There are many good lines in this song here, and even though I am single, it speaks to me in many ways.

He closed this wonderful set with his most well known song called “She Likes The Beatles” , overall I REALLY enjoyed the set and I had a wonderful time tonight. It’s well worth the small ticket price for this venue, and if you get the chance to catch him in your area, I highly suggest you go.