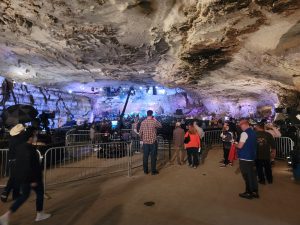 I had been holding on to this job for two years now, and actually the schedule changed so many times ( through nobody’s fault but the pandemic’s) , that I almost just gave up on these tickets. But I have to admit that the staff and ownership of the Caverns made this article possible with the way they accommodated me and everyone else that was there.

The bands that performed all of the three taping days were all changed around a few times, and I had to change tickets for the night I wanted. The staff and management of the Caverns made it painless and easy to enjoy the show. In this article, I am going to share with you a few good places to direct your business to ensure you have a safe, worry free time out there.

Many times I have worked shows in the Caverns, and to be honest, I have had the blessed opportunity to get to see so many of my favorite bands play a gig in a cave! The sound is perfect and the atmosphere is amazing! This night was extra special to me for many reasons, I am going to explain on this one here.

As always, I stayed at Jim Oliver’s Smokehouse hotel. I am truly sad that all of those wonderful Country Music historical artifacts were destroyed, as the restaurant had one of the largest collections of Louvin Brothers memorabilia that I know about. The hotel still remains untouched and functional, however right now the pool is not seasonal use and the only complaint I had were there were no USB plugs on the lamps. Now my friends, if that is the only complaint I had……why not stay there?

There are so many attractions and places to have fun in the area, it is a great place to take a weekend getaway for people like me. Now, I am in recovery for an opiate addiction ( 2 years clean ) and I do not drink, BUT I DID hire a shuttle service to alleviate parking and having to drive on the mountain at night. I hired a gentleman with a private business called Ride With The Captain, who has a colorful decked out van that showed up on time and had very reasonable rates. You can even arrange for him to arrange a tailgate party, as he chauffeurs your party!

The Caverns is one of Tennessee’s hidden treasures that you MUST visit at least once in your life, and no matter what kind of music you enjoy, the Caverns features all sorts of bands and artists to accommodate everyone! Now I will say that it IS chilly inside the cave as the sun sets, so even in summer take a hoodie along!

Now, one of the many wonderful features that happen at this venue is the taping of the famous PBS television show Bluegrass Underground. I do not watch a lot of television but there are two shows I really enjoy watching, those are Bluegrass Underground and Austin City Limits, and in my journalism career I have been to both of them as they taped.

Taped deep within the subterranean amphitheater of The Caverns in Tennessee’s majestic Cumberland Mountains, this “musical adventure” series features both long-established and emerging artists within a broad spectrum of genres to include roots-rock, jam band, R&B, country, soul, folk, americana and bluegrass.

This is season XI of this wonderful television show, and this weekend it featured four different artists on three different days. Even though I only covered one night of the whole process, I am going to provide links to all twelve of the bands this event featured right below here:

For now, to my best understanding these episodes of the television show will begin to air in September and continue through 2022. I attended the last day of filming, and I am including Asleep At The Wheel, Shooter, and Miss Adia Victoria in this article. I did catch some of Moon Taxi, but I wanted to focus on the first three shows here today.

This young lady I had to do some research on before I wrote this article, and this particular act wasn’t Country…but so what? Many of you know for a fact I report on other genres of music, but I’ll be honest here…many of these artists were ( and are ) heavily influenced by Country.

I watched her perform her first song, and I was instantly captivated by her stage presence and the ambiance she brought to the Caverns. As the show progressed, she became more powerful and moved up to a different echelon as she entertained us all. After becoming an adult, she moved around the United States to find her place in the world of music, which I can see her fitting into Americana (even though I hate that term).

Her debut album called “Beyond The Bloodhounds” gave us her the song “Sea Of Sand”, but many of the songs she has came from her growing up in a strict religious family as a seventh – day adventist, and finally getting to explore the world as a young adult.  She has a song called “Troubled Mind” that she included into this set tonight as well, many of these songs address this penned up anger and frustration of feeling out of place, and being held back.

She recites a lot of poetry and tells stories about how many of the songs came about, and how it all culminated into what she does now.  One of the highlights of the entire set was the song “Ain’t Killed Me Yet”, which features ripping guitars with fuzzy tones often related to hardcore Blues.

I recall the song “My Oh My” which originally features Stone Jack Jones, but the song isn’t done as much justice as it was being performed in the caves, the vocals just ripped into my skin and gave me goosebumps!

Her song called “South Gotta Change” from 2020 was produced by T Bone Burnett and I see a lot of Blues influence juxtaposed into this song, as she describes her music as “Gothic Blues”. That particular song was her set closing song for the evening.

Once again I get the humbling opportunity to cover one of the few remaining titanic bands of Western Swing and that is the mighty Texas based Asleep At The Wheel, which is driven by the Legend himself Mr. Ray Benson.  Despite their ever changing rotation of band members, they always have a staple audience, and then there are some fans like me that appreciate certain periods of their tenure. I mean, this band has turned out wonderful acts like Junior Brown and Lucky Oceans.

From the 2018 album called “New Routes” they played one of their covers of a Guy Clark called “Dublin Blues” originally from his 1995 album of the same name. Much like a plethora of other music enthusiasts I was ( and still am ) very heavily influenced by Mr. Guy Clark and Mr. John Prine, while at the same time I was equally influenced by Asleep At The Wheel as well.

One of their earlier albums namely the one called “Collision Course” from 1978 boasted their song called “Ain’t Nobody Home But Us Chickens” which even though it was an earlier song, the current lineup makes those songs just as believable. Miss Katie Shore’s fierce fiddle and her alacrity to play in such a gleeful manner, help secure this band’s place in an ever changing world of music.

Most of you recognize the Cash song “Big River”, but many of you may or may not realize how instrumental this song was to many genres of music. This song was recorded on the Sun Records label in 1958 and released as a single, and Asleep At The Wheel has it on their album “New Routes”.  Another wonderful album they did with guests like Old Crow Medicine Show was a tribute to Bob Wills, which included the song “Tiger Rag”.

The last two songs were “Big Balls In Cowtown” and they finished their set with the ever popular cowboy song “Happy Trails”.  It certainly was a nice treat to have been here tonight, because I had the opportunity here to see an old friend play his last show for a while.

Mr. Shooter Jennings has been ardently working in studios honing his craft on becoming one of the best producers I know of currently. I think the beautiful way he captured the vocals of Miss Tanya Tucker was one of the contributing factors for revitalizing her career fire.

Shooter isn’t just a producer, he is a FAN of music, just like we are. He HONESTLY enjoys the bands and artists he produces for, and there is no doubt in my mind he would be in line with me buying the albums if someone else produced them. He believes in Hellbound Glory, and American Aquarium as well as others. He loves all the old Roots bands I do like Mr. Jayke Orvis and .357 String Band, and as far back as I can recall I remember Shooter supporting local music like we do now.

He played one of his more recent songs first from 2020 called “Leave Those Memories Alone”, and after that he and his band played some different songs that I am not used to hearing live, one of them being the Dire Straits cover “Walk Of Life” from “The Wolf” album. That song was actually fun to hear him do live, but so was the classic “Steady At The Wheel” from the “O Back In Country” album.

From his 2013 “Other Life” album he played “Low Road”, see I think one of the reasons his music speaks to me is I HAD a Skeletor lunchbox too! As I got to know him more, we both had the same loves as kids. If you listen to some of his Beyond The Black podcasts you will get to know him more, as he shares my enthusiasm for talk radio and history, conspiracy theories and more!

From one of the cooler albums he did that many people might not understand was Countach (For Giorgio), but if you grew up in the 80’s like we did, you’ll understand it and Falcor! “I’m Left, You’re Right, She’s Gone”. He played “Family Tree” and one off the latest album called “Rhinestone Eyes” he wrote for Mrs. Misty ( whom I missed seeing this weekend ).

They played “All Of This Could Have Been Yours”  from the “Black Ribbons” album and there were a few I did not write down due to creeping around with my camera, because I knew he was going to bring out Yellawolf to perform one from their new album called “Sometimes Y”.  The remainder of the band were Mr. Ted Russell Kamp, Mr. John Schreffler, Mr. Jamie Douglass, Mr. Erik Deutsch and of course Miss Aubrey Richmond.