On September 5th you can hear this show on 88.5 radio, and see it on television as well :

Lost River Sessions and Mr. Ian’s management Miss Mary Sparr were kind enough to invite me to be a part of this young man’s journey to his time to shine. He is FAR from his apogee ladies and gentlemen, slowly climbing up that hill to his pinnacle. BOTH of these artists were terrific in their own right.

This institution does a LOT for the community here in Kentucky with the preservation of artifacts and music. There are just as many ghosts here than the Country Music Hall Of Fame, and this place is JUST AS integral to what people like I do. This is the home of ROMP and other functions I participate in.

I have included all of the show information in case you would like to listen to this show when it broadcasts. I urge every one of you to tune in, as these artists and this wonderful program needs our unwavering support. These are fine folks promoting fine music for next to nothing cost to you. PLEASE make a donation to them to keep them functional YOUR MONEY goes to a TRUE piece of history here!

The Bluegrass Music Hall Of Fame is and always has been one of the foremost authorities on the preservation, promotion and proliferation of the genre of Bluegrass. However the theater has been hosting some acts that off that genre, but nonetheless the museum itself is second to NONE. 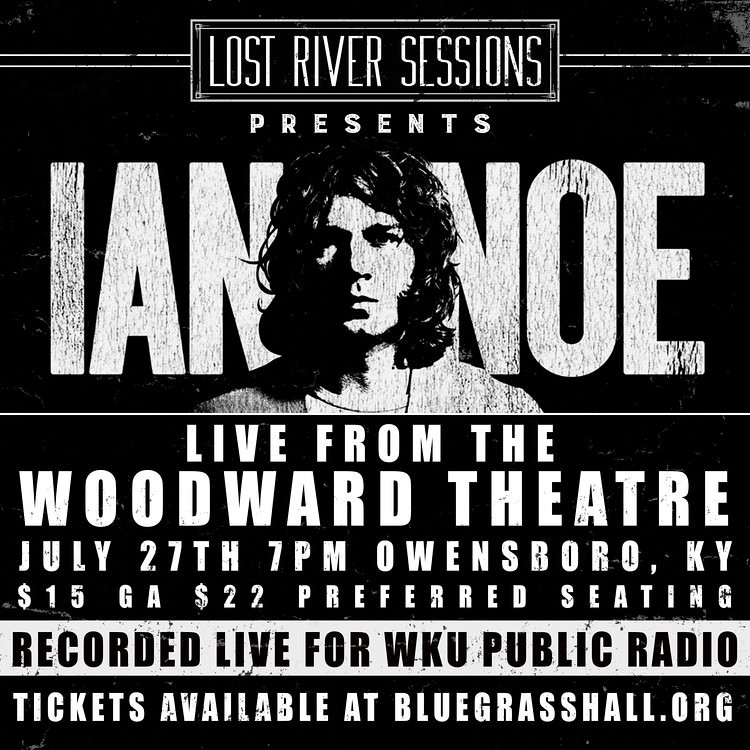 Kentucky songwriter, Ian Noe, headlines the next LRS LIVE at the Woodward Theater inside the Bluegrass Hall of Fame and Museum in Owensboro, KY. Tickets are available now here. Doors open at 5 pm, show starts at 7 pm.  Bar and concessions will be open at 5 pm, and exhibits will available for pre-show touring.

At 29, Noe only left Kentucky for the first time two years ago to go on his first tour, but he’s already grown into somewhat of a folktale within the folk music scene.

A lot has happened in the year and a half since he left that Kentucky mountain. Noe released an EP, Off This Mountaintop, while touring cross-country and throughout Europe, seeing a world he might not have ever experienced had he remained on the oil rigs. He’s played for his hero, John Prine, at a recent tribute show, which subsequently landed him an opening spot for the legend on a string of upcoming dates overseas. He’s gained attention from industry giants like producer Dave Cobb, who all but demanded to record Noe’s first full-length album, Between The Country, released May 31. Literal giants have also taken note: Earlier this spring produced a surreal viral video of Noe arm in arm with Khal Drogo, of all people.

This past weekend I had a once in a lifetime opportunity to witness the songwriting mastery, and precise imagery in his songwriting that is adored by esoteric people like me. I mean to be honest only a small few of us REALLY “get it” here. You actually have to sit and analyze his lyrics with an open mind, and look for all the special things hidden in his tales of life.

The ambiance of this venue was breathtaking in every way, and the moment I entered the halls I was overwhelmed with love and appreciation for history, but I knew right away what I was about to see..and that is one of the finest up and coming singer songwriters of the decade. Take my word for it people…he is one of next best things to happen to the world of music.

He only has his full debut album to pull material from, but having been produced by Mr. Dave Cobb, and displaying the abilities of Mr. Adam Gardner on bass and keyboards, and Mr. Chris Powell on drums make what he has more powerful than artists with ten albums. I mean, let’s face it folks, I love many bands that have multiple albums but the songs aren’t as amazing as his.

He captivates an audience with intense lyrics, and he has an indefatigable ability to go right into another song of a different subject matter…but in his own twisted way, they all compliment one another. First he began with a song called “Letter To Madeline” which is a song about a bank robber whom gets caught in his town. His wife is named Madeline, and he is headed home with the money and asked to be buried right if they kill him.

“If Today Doesn’t Do Me in” is a slow song that contains a soothing melody full of hammer on finger picking, that makes me regard him as a modern day John Denver or John Prine. His mere presence just and character will be one that will not be forgotten among the ages. That is a song you can interpret in so many ways.

“Irene (Ravin’ Bomb)” is about a rowdy and addicted relative of his that ruins family holidays, I believe we all have one of those at our Thanksgiving table? A little younger than him, and a constant drunk and a subject that created a song the entire crowd gleefully sings along with. Ian Noe possesses  a special charm I don’t see in many others on stage, and I firmly believe  God broke the mold for this young man.

“Barbara’s Song” is about a 1904 train wreck, and it paints one hell of a poignant story in your mind. The bridge collapsed and very descriptive lines from the chaos, with one of his more descriptive songs here. He did indeed play some songs that weren’t on the album like the “P.O.W Blues”, and his own slowed down version of Springsteen’s “Born In The U.S.A.”.

“Junk Town” was also about his town he is from, like I previously said many of them are intertwined into one another. It was just so fun watching him slowly rock his body  to the rhythm of the song. He strikes every note with exact meaning, and he knows what he wants me to feel, with songs like “That Kind Of Life”. He closed the show with the title track of the album called “Between The Country”.

Mr. Nathan Blake Lynn is a West Kentucky boy like me. He is a Paducah native, where I lived when I married many years ago. MANY great pickers came from our area, and he knows ALL of them. He looks up to the same heroes I do, and his music is a little bit of everything. He mentioned my buddy Mr. J.T. Oglesby and others.

He played an old Mac Wiseman song called ” I Wonder How The Old Folks Are At Home”, A.P. Carter was credited for writing this old Osborne Brothers song.  He also played the song called ” The Girl With Daisies In Her Hair”, which was a song about a seventeen year old gal he knew in his youth. Swimming and running around outside as youngsters, and faded old love.

He didn’t have as much time to play, but the stories he told, and the professional passion he had made the songs he DID play for us VERY special. The best song he played was “21st Century Festival Blues”, now YOU KNOW this website covers over 200 nationwide festivals? YEP we write informational articles for over 200 of them, and together, we attend 20 per year, and I had a BIG SMILE on my face when he mentioned all of my favorite ones.