For seven years now, Miss Beck Rustic and her crew work diligently to bring a TON of good bands to the northeast. Now, I’ll admit that this is one of the few festivals I have not yet had the opportunity to visit, and cover YET. There are just so many GREAT festivals to attend all over the United States, and I’m only one man.

Tomorrow night at 7 Central 8PM EST, on Mr. DJ Del Villarreal’s Go Kat Go Rockabilly Radio Show there will be a bunch of news announced, like the band lineup announcement and event news.  Listed below are the already confirmed acts, that were on for 2020. Now USUALLY I include links to EVERY ARTIST , and when the full lineup is announced I may do that.

Many of you know I work third shift, so I will be just waking up before this segment airs, and I will be listening in to what I can of this event. I will update this article for you, and let everyone in on the news, in case anybody is interested and missed out in the show.

BANDS
We are working with the bands from the 2020 lineup, and most of them are confirmed now, for 2021. Below are the confirmed acts so far.
Full lineup will be announced in January.

IN THE BALLROOM…
BIG SANDY & HIS FLY-RITE BOYS! From California
THE RIP’EM UPS! From California
DADDY LONG LEGS! from New York
SHAUN YOUNG! from Texas
BLACK KAT BOPPERS! from England
TAMMI SAVOY AND THE CHRIS CASELLO COMBO! from Illinois and Tennessee
GLENN DORAN & THE PRAIRIE ECHOES! from England
JOSH SORHEIM! from California
THE TELEVISIONARIES! from New York
MICHAEL HURTT & HIS HAUNTED HEARTS! from Michigan and Louisiana
THE HI-FI LOWDOWNS! from Rhode Island
THE SOAPBOX SAINTS! from Rhode Island

AT THE PINEAPPLE POUNCE…
JITTERY JACK AND AMY GRIFFIN! from Massachusetts

AT THE BAY STATE BARN DANCE…
The Bay State Barn Dance is a Live Music Variety show, and the special guests listed below are each doing only a few songs… it’s a spectacular event, and some of our special guests are coming in JUST for the Barn Dance! 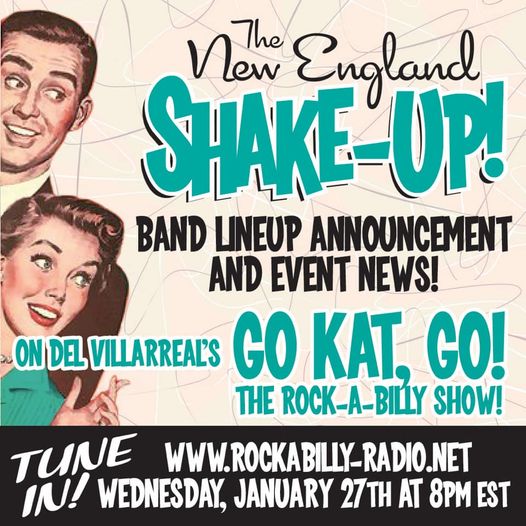